This two-story Classical Revival brick building was constructed on a two-acre lot conveyed in 1871 by Dietrich Biemann, one of the founders of the Town of Walhalla. The land was granted to William S. Bowman, trustee of Newberry College, with the stipulation that if the college ceased to exist or was relocated, the land would revert to the Walhalla Town Council to be used “exclusively for the promotion of the education of the white race and more specifically of the white residents” of the town. 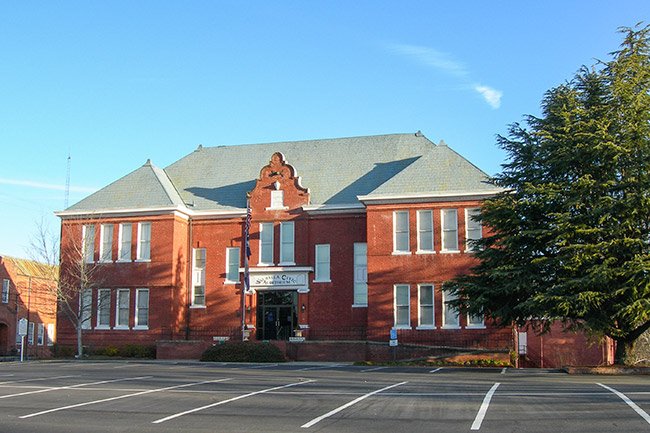 Newberry College relocated to Walhalla in 1877 after suffering financial hardships following the Civil War. It remained here nine years before returning to Newberry. Adger College was then organized and operated from the same building until 1884, when a grammar school opened in its place. That school burned to the ground in 1888. Soon after, a dance pavilion was constructed on the site, which was then briefly known as Catherine Park. 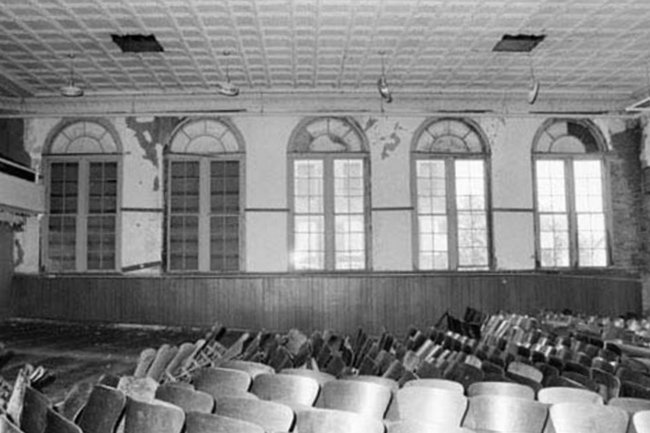 SC Department of Archives and History, 1992 © Do Not Use Without Written Consent

Built in 1902, the central portion of the present building (shown here) served as the Walhalla Graded School in Oconee County. Additions were made over the years, including an eastern wing and auditorium, both built between 1913 and 1914, and a 1950s classroom in the rear to provide more educational space. The building was designed by an important architectural firm, based in Columbia, known as Edwards and Walter. The firm of Edwards and Walter, made up of William Augustus Edwards and Frank C. Walter, was responsible for the design of many important buildings throughout the state of South Carolina. Collectively their portfolio includes such notable mentions as the Abbeville County Courthouse, Sumter County Courthouse, Withers Building at Winthrop University, and Winnie Davis Hall at Limestone College. 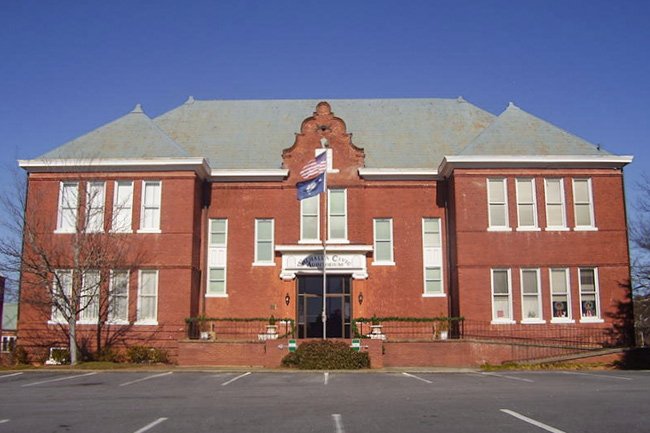 David Seamans of Walhalla, 2017 © Do Not Use Without Written Consent

During its first session, the Walhalla Graded School served 172 pupils, but this number increased dramatically over the years. By the 1923-1924 school year, a separate high school was needed. Overcrowding had made it necessary for high school students to use the building in the mornings and grammar school students to use it in the afternoon. The building operated as a school until 1980 and served as the offices for the Oconee County School District from 1981 though 1992.

The building sat boarded and abandoned until a group of concerned residents, known as the Walhalla Auditorium Restoration Committee, created a charter, obtained 501(c)3 status, secured a lease, and began restoration. The auditorium now boasts 453 seats (140 of which are in the balcony). The reception hall can seat 100 and is available for rentals; it also doubles as a place for concessions during events. The season runs from July through June each year and can contain anything from musical performances and plays to conferences and community events. Restoration was complete by August of 2003, and the first event featured a sold-out performance of the world-renowned pianist, Emile Pandolfi.

The Walhalla Civic Auditorium is listed in the National Register as the Walhalla Graded School:

The Walhalla Graded School is comprised of a 1902 graded school, a 1913-14 auditorium and east wing addition, and a 1950s classroom addition. It is significant as an excellent example of an educational building in the Classical Revival style designed by the Columbia architectural firm of Edwards and Walter. The school is also significant for its role in the educational development of Oconee County. An important landmark in Walhalla, this school was built on what had historically been the temporary site of Newberry College and Adger College. It is one of the few surviving, relatively intact, early twentieth century brick school buildings still in use today in the county. The entire building is constructed of brick and rests on a brick foundation, with a raised basement under the two earliest portions of the building. These two early portions of the building have a hip roof with hip knobs and are covered with stamped sheet-metal shingles. The central section of the façade features a central projecting pavilion topped by a curvilinear gable. The auditorium is a one-story, six-bay brick building which extends from the north wall of the main school building. The classroom addition is a one-story, one-bay brick building which extends from the north wall of the auditorium. Listed in the National Register February 13, 1992.