This stately home in downtown Columbia was built in 1820 by Jesse De Bruhl, who owned a plantation along the Cooper River. Today the home is known for its elegant landscaping, much of which is original. The house is also renowned as an outstanding example of Greek Revival architecture. It is thought to have been designed by noted architect, Robert Mills. 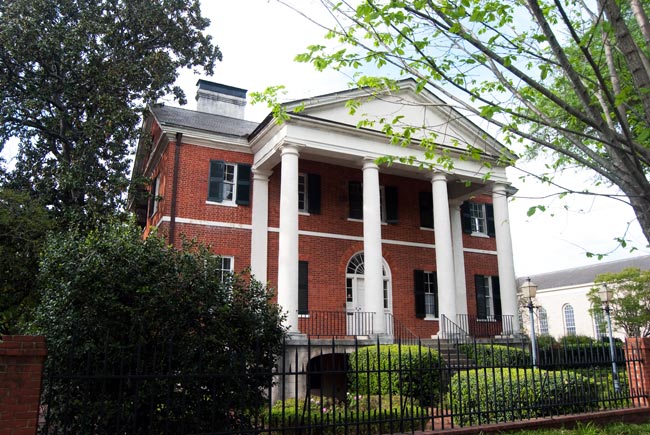 During the Civil War the home was used as the headquarters for Confederate General Joseph E. Johnstone. It was then targeted to be burned by General Sherman’s Union troops, though according to a local legend, De Bruhl’s widow pleaded with General Sherman to spare the home. General Sherman, who was headquartered in a home behind this one, acquiesced to her request, though at some point flames were set to the house, as burn marks are still visible in the roof’s rafters.

The home later belonged to De Bruhl’s grandson, Colonel J.Q. Marshall, and remained in the De Bruhl family for an entire century. Today the home and gardens are occasionally opened for tours, though the property is privately owned. Dates of tours are posted by Historic Columbia.

The De Bruhl-Marshall House is listed in the National Register:

The DeBruhl-Marshall House is noted for its significant landscape architecture. Gardens to front and east of house are in their original form and still contain its first brick walkways and many plants and trees planted when the house was built in 1820. The lot was L-shaped with a carriage house and gardens. The house is also significant as one of Columbia’s most outstanding examples of Greek Revival architecture with solid brick exterior and interior walls, massive columns, impressive arched front and rear doorways, original materials and manual craftsmanship. The two-story house with gabled slate roof and full basement has three-foot thick brick exterior walls which taper as they rise to the main floor. Steps rise from the arched basement to the marble portico floor which extends three bays of the five bay width. Four massive Doric columns support an unornamented pediment. The interior remains largely original with the exception of a flying staircase taken from Columbia’s old courthouse that was torn down before 1896.