The brick building that houses McMaster College at the University of South Carolina in Columbia has always served as a school. Built in 1911, it was originally a public grammar school in Richland County School District One. The University of South Carolina bought the building in 1960 and named it McMaster College for Colonel F.W. McMaster (1826-1899), the first chairman of the Board of School Commisioners and former mayor of Columbia. 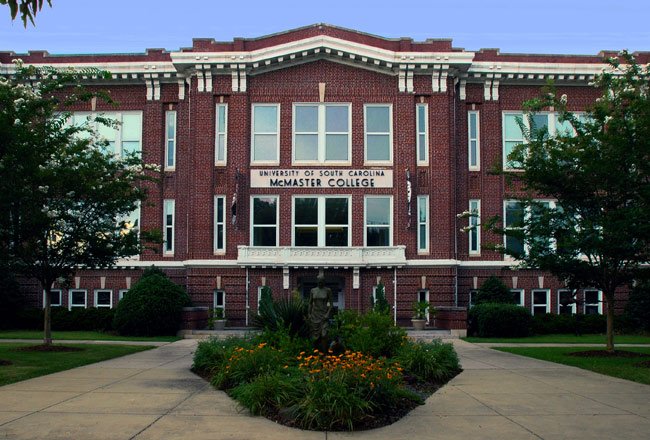 McMaster School is associated with the campaign for educational reform that swept through the state in the first quarter of the twentieth century. Architecturally, it is an example of the style of school architecture that was developed as a direct result of this campaign. The style is a result of the standardized plans created by the architecture firm of Edwards and Walter in 1905, and can be characterized as an early twentieth century revival style. The school was opened in 1911. It served the city of Columbia as a grammar school in Richland County School District One from 1911 to 1956.

The structure was sold in 1960 to the University of South Carolina for $168,800. At this time, it was renamed McMaster College. The building is of frame construction with a brick veneer, wood trim, and cast stone detailing. The brick veneer employs a Flemish stretcher bond, with belt courses on the first story, blind panels between the second and third stories, brick pilasters, quoins, and gauged arches with keystones above the windows. The roofline of McMaster has castellated parapets, hiding a flat roof. There is a decorative cornice at the roofline supported by fluted wooden brackets and adorned with dentils. There have been two additions, the first of which (ca. 1950) incorporates many of the architectural details of the original building. The school was named for Colonel F.W. McMaster, first chairman of the Board of School Commissioners and mayor of Columbia.