German immigrants Charles and Hannah Zimmerman settled in Columbia and built their Greek Revival-style home (pictured below) and an adjacent school, the Zimmerman Female Academy, in 1848. The school operated successfully as a private academy for young women and offered a Classical education, which included courses in philosophy, literature, and the Romantic languages. 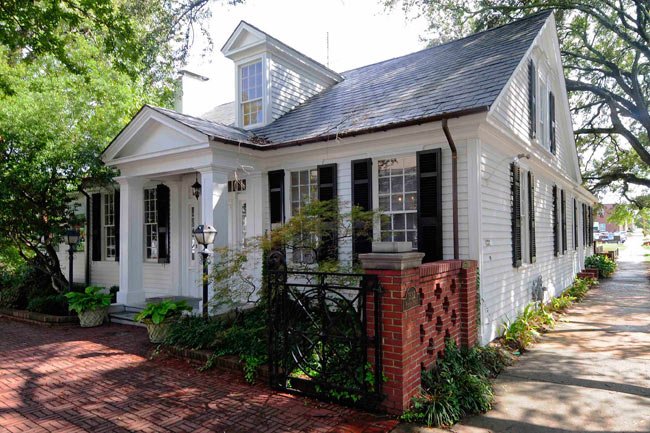 Hannah Zimmerman operated the school (pictured below) for three more years following her husband’s death in 1867. During this time she called the academy Mrs. Zimmerman’s Female Institution. The school closed following her death in 1870. 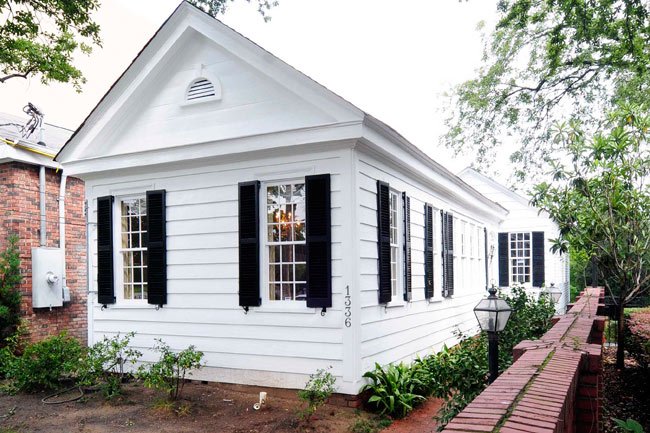 The home and school eventually were sold as separate properties. The Zimmerman House underwent an extensive renovation in 1946, and the interior was renovated to a more modern Colonial Revival design. Today both structures are used as offices.

The house is situated at a right angle to the street and faces north. The side, street, façade consists of a one and one-half section and a one-story wing. The front, or north, façade features a central entrance sheltered by a pedimented portico supported by two paneled wooden square columns. The entrance features a transom and sidelights and flanking pilasters. The house also features a boxed cornice and a gable roof covered by slate. Following the Seibels family purchase of the house in 1946, the structure was both altered and enlarged.

The Zimmerman School is located directly north of the Zimmerman House. Its main façade faces south, toward the Zimmerman house. The school is a small one-story clapboard building with a gable roof situated at a right angle to the street. The entrance door is situated at the eastern (right) end of the south façade and features a fanlight and sidelights. A slightly projecting wing is located at the very eastern end. Charles and Hannah Zimmerman opened the Zimmerman Female Institute at this site in 1848. Women at the school took courses in reading, orthography, writing, grammar, arithmetic, geography, history, philosophy, music, English, Latin, French, German and other subjects. After Dr. Zimmerman’s death in 1867, Hannah continued to run the school as “Mrs. Zimmerman’s Female Institution” until her death in 1870.