South Carolina’s highest court sits a block away from the State House complex in downtown Columbia. In fact, the South Carolina Supreme Court originally met in the State House before moving into the former post office building in 1971. Construction on the post office began in 1917 but was delayed during World War I when materials destined for the building were diverted to the Camp Jackson, now Fort Jackson. 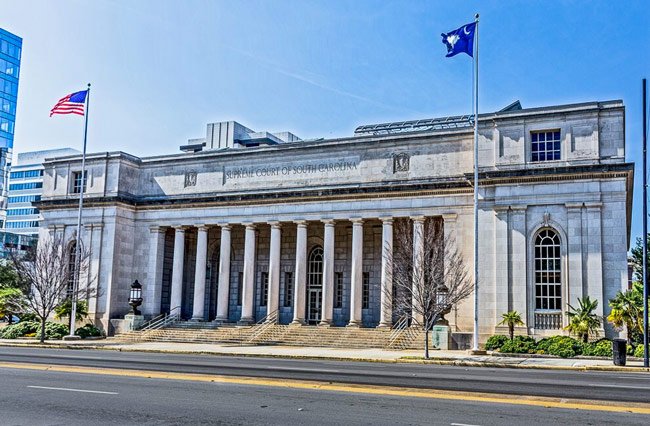 The building was completed in 1921 and served as a post office until 1966. That year, the post office moved to a larger building to accommodate the high volume of mail it was receiving. The state then acquired the Neo Classical building and converted it into quarters for the South Carolina Supreme Court. The building was renovated for its new purpose by Florence architectural firm Gill and Wilkins. The state was commended for repurposing the structure.

The South Carolina Supreme Court is listed in the National Register:

(Old United States Post Office) Significant in the area of communications, the Supreme Court of South Carolina Building served as main postal unit in Columbia from September 1921 to June 1966, when operations were moved to a new building. Acquired by the State of South Carolina for use as the Supreme Court of South Carolina Building, it is a significant example of preservation through adaptive reuse. Adaptation of the building was admirably achieved by architects Gill and Wilkins of Florence and interior designer Andrew V. Kerns of Columbia. Its location on the block adjacent to the State House enhances the complex of governmental buildings that includes and surrounds the South Carolina State House. Foundations for the Neo-Classical style building were laid in 1917. With the start of World War I, materials allotted for the post office were reallocated for building Camp Jackson (now Fort Jackson). Construction, resumed after the war, was completed September 30, 1921.