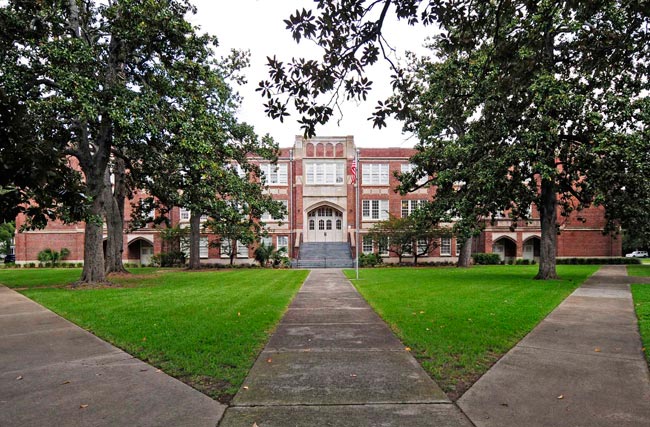 The school was named for Dr. Patterson Wardlaw, a renowned educator and professor of education at the University of South Carolina. Wardlaw College, a building within the USC Collge of Education, is also named for Dr. Wardlaw. Wardlaw Junior High continued to operate through most of the twentieth century, including during desegregation. When it finally closed its doors, the historic Gothic building flanked by grand magnolia trees sat vacant until being converted to apartments for seniors.

(Wardlaw Middle School) Begun in December of 1926 and completed in September of 1927, Wardlaw’s significance lies in the fact that it was the first junior high school building in the state. In addition, its design by J. B. Urquhart is a good example of a 1920’s collegiate Gothic building. The grounds, formerly a farm that was a part of a plantation, are accented by large magnolias. Built during the superintendentship of Dr. William Harvey Hand, construction cost of the school was $220,000. The school was named for Dr. Patterson Wardlaw, one of the foremost educators of the South, at the time, a member of the faculty of the University of South Carolina. Before Wardlaw was built, schools in South Carolina were organized into elementary schools, grades 1-7, and high schools, grades 8-11. It is a three-story brick structure built in a rectangular plan with a central courtyard. The entrance is accented by a pointed arch and Gothic window tracery above the doors. The flanking buttresses are infilled with an engraved panel bearing the name of the school, nine-over-nine double-hung windows, and a blind arcade with diapering brickwork at the terminus. The remainder of the façade is highlighted by a cast stone belt course and a series of decorative stone panels beneath the three unit groupings of windows on the third floor. Projecting one-story porches serve as ground floor entrances around the building.