This courthouse in downtown Columbia was built in 1936 and designed by Harold Tatum, the architect of the neighboring John C. Calhoun Building. The Renaissance Revival structure was built next to the present-day Columbia City Hall, which at the time was the United States Courthouse and Post Office. 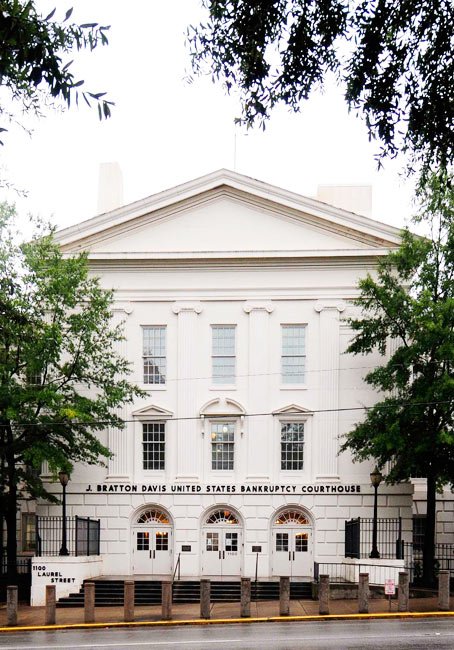 The J. Bratton Davis United States Bankruptcy Courthouse is listed in the National Register as the U.S. Courthouse:

The United States Courthouse was designed in 1936 by Harold Tatum, a graduate of the School of Architecture of the University of Pennsylvania and one of the few trained architects to practice in Columbia during the 1930s. The Court House is a notable example of classic Renaissance Revival architecture. The structure is also significant for its use of poured monolithic concrete as a major building material. Although poured monolithic concrete is often used for buildings with plain linear designs, it is unusual for this method of construction to be used on structures with the kind of intricate detailing that characterizes the Renaissance Revival style. The Court House was built to house the United States District Court of Eastern South Carolina, the offices of the Internal Revenue Service, the Department of Justice and the United States District Attorney. The structure features a rusticated ground level, rusticated quoins, smooth walls and trabeated fenestration accented with pediments of various types. The central bay is detailed with Ionic fluted pilasters that support an entablature and plain pediment. The building consists of a full basement, three full floors, and partial fourth and fifth floors.