This antebellum home in Spartanburg was built in 1854 for Dr. James Bivings after Bivings sold his share in the textile manufacturing company he established in 1831, Bivingsville Mill. The mill was later bought and operated by Dexter Converse – also the founder of Converse College – who called the cotton factory Glendale Mill. In 1859 Converse bought and inhabited the Greek Revival house previously occupied by Bivings in the mill village of Bivingsville – a name Converse changed to Glendale. Meanwhile, Bivings had relocated to this stately home of similar design in town. 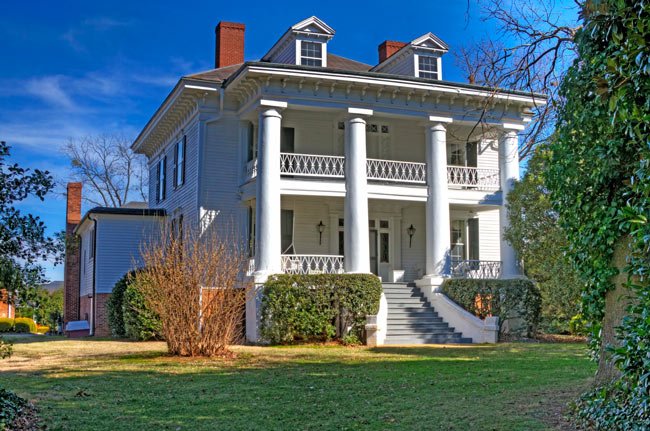 The home was later occupied by Bivings’ nephew, United States Congressman Colonel John Hamilton Evins, first elected to the House of Representatives during the controversial 1867 “Red Shirts” election. Evins served until his death in 1884. The home remained in the Evins family for several generations. Today the Evins-Bivings House is a 10-bedroom private residence sitting on 3.6 acres and abutting the campus of Wofford College.

The Evins-Bivings House is listed in the National Register:

The Evins-Bivings House is a well-cared-for example of South Carolina’s antebellum Greek Revival architecture. It is particularly notable for the quality of its carpentry craftsmanship. It is associated with a family that has supplied Spartanburg with industrial, religious, political and civic leaders prominent in the development of the area. The house was built ca. 1854 by successful textile pioneer, Dr. James Bivings, chiefly responsible for building and promoting manufacturing in the Spartanburg district. He founded Glendale Mills, the first large textile plant in the area. Subsequent family occupants have been a Bivings nephew, Col. John Hamilton Evins, elected U.S. Congressman in the 1876 “Red Shirt Election” and serving until his death in 1884, and Choice Evins, president of Clifton and Glendale Manufacturing Co. The two-story, white clapboard house features a four-square interior plan, massive Doric columns and notable balustrades on double piazzas. The nominated property also contains the original kitchen, slave quarters, smoke house, and well.