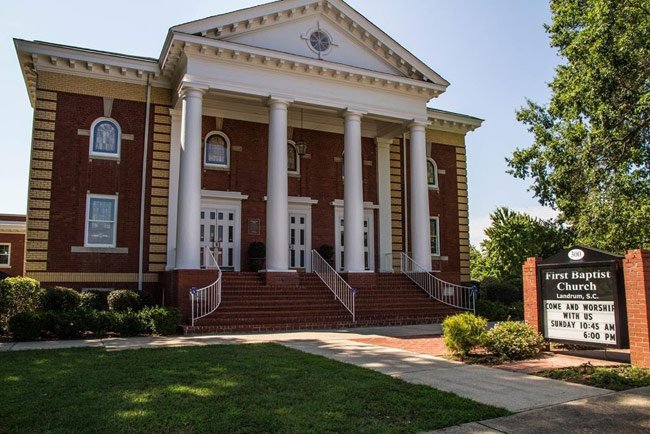 Landrum was incorporated as a municipality in 1883 and named for the Reverend John Gill Landrum due to his contributions to the community’s growth as a railroad town. Landrum had died the year before, on January 19th, 1882.

In 1890 the congregation of Wolfe Creek Baptist voted to build a newer, larger church near the town and its railroad station. The church eventually conducted a land swap, trading its property for a lot in the new town owned by Nannie Landrum, a daughter of the Reverend John Landrum. The deal stipulated that its former tract be used for a school and cemetery; today Landrum Cemetery, where Nannie Landrum is interred, occupies the church’s former (third) property. The present brick church was built on its current site in 1922 and renamed First Baptist Church Landrum.

We would like to include more information about this church, including its second church, about which little appears to be known. Please contact us share@scpictureproject.org if you can help. Thanks!