This simple Adam-style farmhouse in Lyman, also known as the Morgan-Stewart House, was constructed over a period of three years and was completed around 1790. It once sat on more than 2,000 acres of farmland and doubled as both a residence and a stagecoach stop in the early nineteenth century, which explains the double entrances. 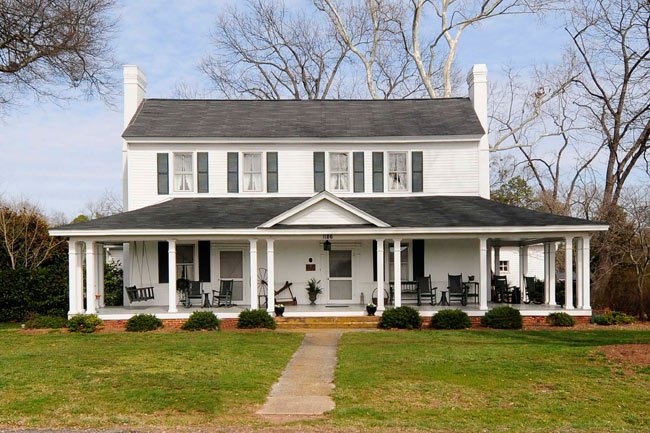 The house has both a north and a south parlor, though the north parlor originally was not accessible to the rest of the house to separate guests from the owners. However, a door was added to the north parlor in 1900. The property was sold to Samuel Morgan in 1840, and it is still owned by Morgan descendants. 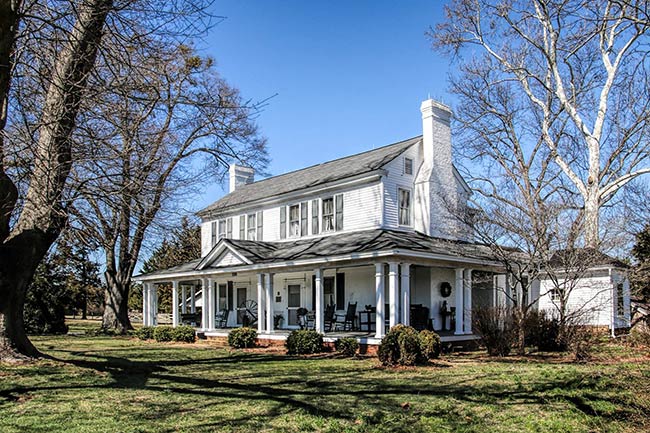 McMakin’s Tavern is listed in the National Register, which adds the following:

(Morgan-Stewart House) McMakin’s Tavern, constructed over a three-year period ca. 1790, was a stagecoach stop throughout the early nineteenth century, as well as the center of a large plantation. An upcountry farmhouse, it is basically a two-storied clapboard single house with gable end chimneys. Although the exterior is rather simple, the interior displays elaborately carved woodwork in the Adam style. The paneled doors have raised shields and intricately carved entablatures; a portion of the stylized decoration is repeated in the paneled wainscoting and in the elaborate mantels and over-mantels. The mantel and cornice molding in the south parlor employ a shell motif, while that in the north room has a fan motif.

The house was constructed by artisans who trained slaves to carve the wood, which had been soaked to make it extremely hard and durable. The one-story veranda that extends beyond the ends of the house and is supported by square columns above a solid railing was added ca. 1910. The plantation originally contained over 2000 acres of fertile farmland. There was once a complement of outbuildings around the house that included a forge, store, gristmill, cobbler’s ship, weaving house, and wheelwright’s shop.