Now serving as the municipal building for Lyman, this structure is one of the last remnants of Pacific Mills. Lyman was originally called Groce’s Stop for the general store that was established here in the 1870s by August Belton Groce. A farming community grew around the store, which formed the epicenter of the burgeoning town until Pacific Mills built the Lyman Printing and Finishing Mill on 700 acres purchased from the Groce family. The mill was named for Pacific Mills president, Arthur T. Lyman. 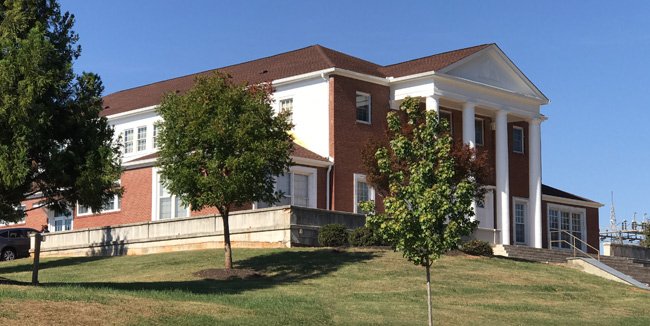 Charles Pittman of Duncan, 2016 © Do Not Use Without Written Consent

In 1927 the mill expanded, and its owners constructed a village for mill workers. A community center was built (seen above), as were churches, a school, and 375 homes. In addition, a baseball league was formed, a community pool was added, and the mill replaced the general store as the social center of town.

It was during the development of the mill village that the community’s name was changed to Lyman for the mill and its president, although the town would not officially be incorporated until 1955. By then the mill was owned by Burlington Industries, which bought Lyman Mill in 1954. Burlington Industries sold the mill housing to the homes’ occupants in 1955, and later that year sold the plant to M. Lowenstein and Sons.

M. Lowenstein and Sons (later renamed M. Lowenstein Company) operated the mill and a wastewater facility that served the town as well as the plant. In 1986, M. Lowenstein Company was purchased by Springs Industries, which continued to operate it until 2005. By 1992, the Lyman Printing and Finishing Company operated as a division of Springs.

In 1996 the wastewater facility came under sole operation of the town. The mill itself was demolished in 2012, while related structures were sold to local businesses or to the town. The former community center now houses the Lyman Municipal Complex.