This turn-of-the-century Neoclassical house in historic Mayesville was built in 1907 for H.C. Bland. A talented landscape artist, Bland later moved to Sumter and established Swan Lake Iris Gardens in 1927. He left behind the stately home known for its Corinthian columns and lush gardens, which was bought by P.M. Tiller. Under Tiller’s ownership, the home underwent significant changes. Over the following years the side porches were enclosed, decorative shutters were removed, the exterior was covered with aluminum siding, and Bland’s gardens became untended. 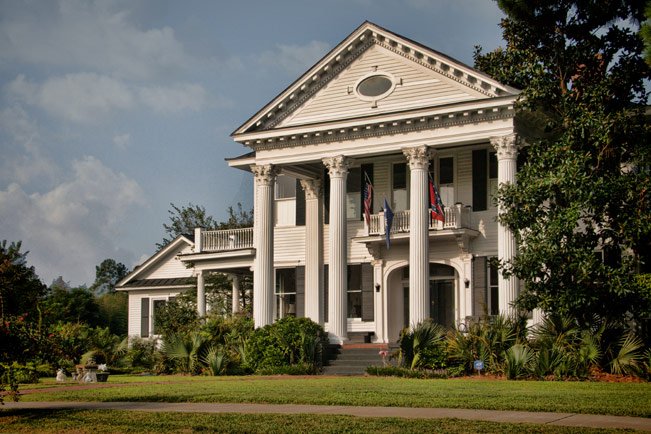 The home sat empty for five years beginning in 1980. The Tillers’ son and daughter-in-law eventually acquired the home and in 1985 began restoration efforts. The younger Tillers discovered original spindles and shutters in a storage shed behind the house and incorporated them into the project. They restored the porches, removed the aluminum siding to reveal a decorative attic windows, added bathrooms (the home originally had only one), and rehabilitated the garden. Much of the renovation was modeled after old photos of the home shortly after it was completed. Today the home stands once again as the jewel of Mayesville and a testament to the vision of H.C. Bland.

The P.M. Tiller House is listed in the National Register as part of the Mayesville Historic District: