This historic home in Greeleyville was built around 1906 for an African-American couple, Edward and Margaret McCollum. The McCollums moved to the area so that Edward could work as a machinist for the Mallard Lumber Company. Though the home was built by an African-American contractor named George Whack, it is suspected that Edward McCollum contributed to the interior woodwork. 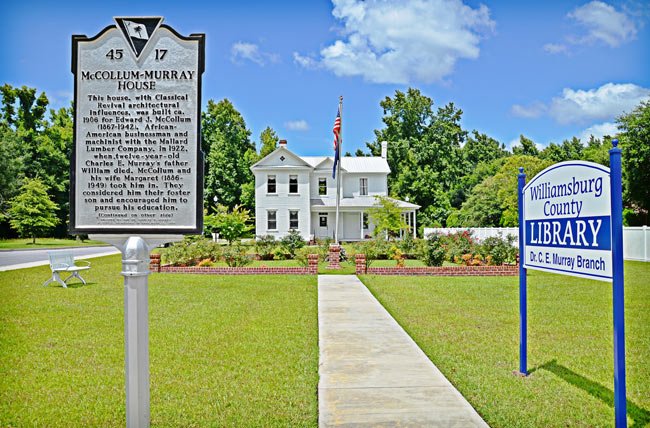 The McCollums took in Charles Edward Murray at the age of 12 following the death of his father. Murray went on to attend college at South Carolina State University in Orangeburg and became a high school English and drama teacher in Kingstree after his graduation. After serving in World War II, Murray returned to the classroom and received his Master of Science in Education from South Carolina State. In 1960 he became the principal of Williamsburg County Training School; the school’s name was changed in 1972 to C.E. Murray High School while Murray was still serving as principal, making him the first active principal in South Carolina for whom a school was named. In 1979 Murray was honored with a Doctorate of Humanities from Claflin College.

Margaret McCollum, who inherited the property from her husband in 1942, stipulated that after her death, Murray could live in the house for the remainder of his life. She died in 1949, and Murray lived here until his 1999 death from a car accident. The home became a branch of the Williamsburg County Library in 2010 and is named for the esteemed educator.

The McCollum-Murray House is listed in the National Register:

(C.E. Murray House) The McCollum-Murray House, constructed ca. 1906, is significant as the long-time residence of and most intact historic resource associated with the productive and professional life of Dr. Charles Edward Murray, one of Williamsburg County’s and South Carolina’s most significant educators of the mid-twentieth century. Murray was quite possibly the first African American in South Carolina to be honored by having a school named for him, and was also the first active school principal in South Carolina to have a school named for him. In addition the house is significant for its importance to the African American community in Williamsburg County and as an excellent and intact local example of transitional folk Victorian and Classical Revival residential architecture.

The McCollum-Murray House, a substantial home in a small South Carolina town built at the turn of the twentieth century for a successful African American couple, Edward J. and Margaret McCollum, by an African American builder, George Whack, is a rarity for its time and place. The house was originally constructed as a two-story, T-shaped or gable front and wing dwelling with a single-story porch on the front. Early in the history of the house a single-story rear gabled addition was constructed, followed by another single-story shed-roofed addition to the east of that in the 1950s. The metal roof is cross-gabled in form with full cornice returns or pediments in all the gable ends. The front porch wraps around to the east, has a shed roof, and is supported by square paneled pillars.