McDowell Presbyterian Church in the southern Williamsburg County community of Greeleyville was formally established on July 31, 1910. The church was named for the Reverend James McDowell, a pastor of forty years in neighboring Manning. 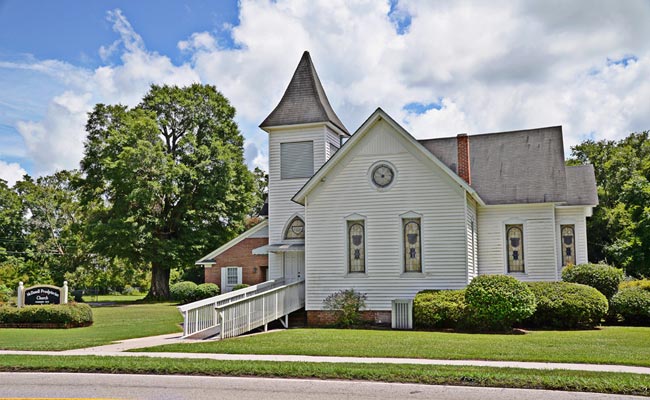 The church came about as the result of the merging of other local congregations. About three miles east of Greeleyville, Elon Presbyterian Church – an outgrowth of Williamsburg Presbyterian Church in Kingstree – was formed in 1856, followed by the founding of Richmond Presbyterian Church along the Santee River in 1885. A year later, folks from Elon along with a few members from another church, Brewington, merged to form Corinth Presbyterian Church. By this time, the membership of Elon had all but vanquished, with most people attending one of the newer Presbyterian churches.

By 1906 the three neighboring churches – Richmond, Corinth, and Brewington – decided to build a central manse in Greeleyville for a pastor, with each church having an interest in the manse. The manse was completed in early 1907, and the Reverend R.L. Grier, a supply pastor, was living in the home by February. A few years later, it was decided that a central church was also needed, and McDowell Presbyterian Church was born, with the Reverend Grier serving as its first pastor. Today McDowell Presbyterian Church continues to grow and serve the people of Williamsburg County.

Contributor Linda Brown says of McDowell Presbyterian Church: “It is the quintessential small-town church and is a fundamental part of the community in Greeleyville.”