Two nationally-significant events occurred in Rock Hill during the Civil Rights Movement. The first happened when a group of African-American students staged a sit-in at the McCrory’s segregated lunch counter on the last day of January, 1961. The young men, all of whom attended Friendship Junior College, entered the restaurant, sat down, and ordered hamburgers, soft drinks, and coffee. They were refused service. When asked to leave, they declined and, in turn, were arrested. 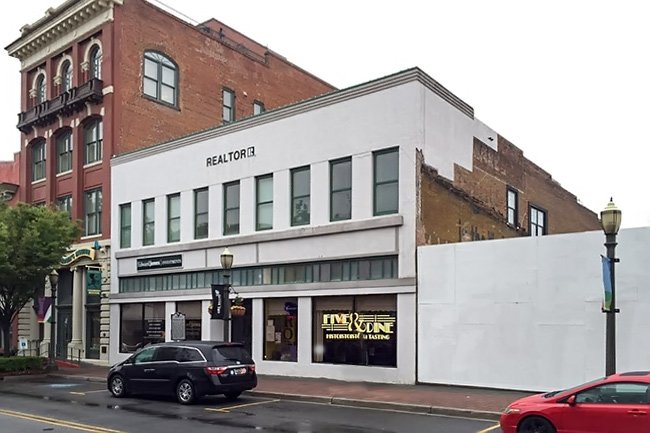 The former McCrory’s Lunch Counter now serves as the Five and Dine Restaurant.
(Michael Mascari of Blythewood, 2016 © Do Not Use Without Written Consent)

The students were charged with trespassing and breach of peace. Ordered to spend 30 days in jail or pay a fine of $100, nine of the ten chose to serve out their sentences and were sent to the York County Prison Farm for hard labor. While sit-ins had taken place in Rock Hill for over a year by that point, little progress had been made. Rock Hill, led by the White Citizens Council, remained deeply segregated, and local media no longer covered the protests. 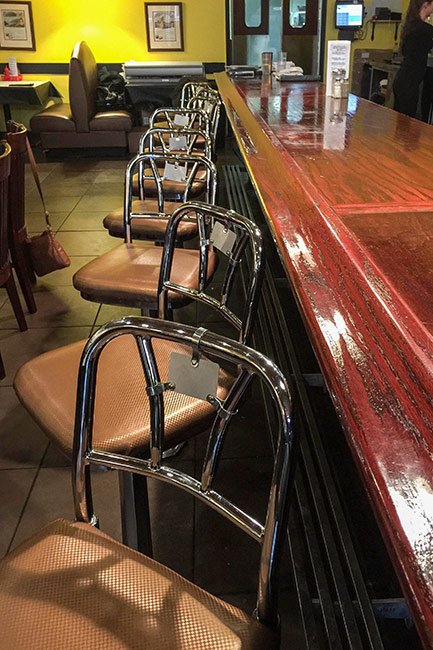 Plaques adorn each chair where the Friendship Nine sat.
(Michael Mascari of Blythewood, 2016 © Do Not Use Without Written Consent)

This sit-in was unique, however, in that it was organized by students and employed the relatively new “jail, no bail” method of resistance. This method, supported by Dr. Martin Luther King, Jr., called on activists to serve their jail time rather than pay a fine and concede guilt. In Rock Hill alone, the black community had already spent $17,000 on bail related to Civil Rights activities. 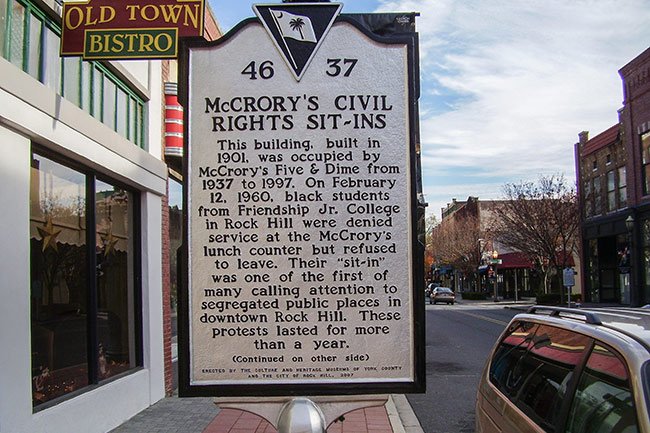 Stanley and Terrie Howard, HMdb, 2008 © Do Not Use Without Written Consent

In addition to hard labor, the students were subjected to solitary confinement and food rations during their confinement. Forty-six years later, in 2007, the City of Rock Hill unveiled a marker outside of the old McCrory’s in the their honor. Eight of the men were still living and present at the ceremony. The restaurant changed hands in 1993 and again in 2013 and is currently known as the Five and Dine. Plaques on the backs of chairs mark the locations where the members of the Friendship Nine sat. The plaques commemorate the following brave souls: John Gaines, Thomas Gaither, Clarence Graham, Willie McCleod, Robert McCullough, Willie Massey, James Wells, David Williamson Jr., and Mack Workman. (The tenth student, Charles Taylor, decided to pay his fine for fear of losing his scholarship.) 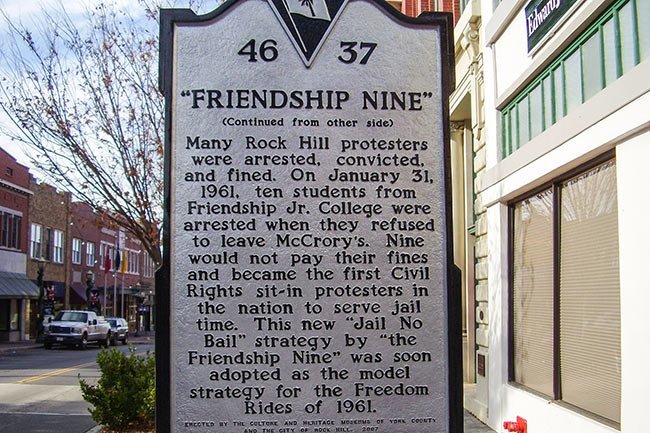 In 2015, Judge John C. Hayes, III overturned the convictions of all nine men, saying, “We cannot rewrite history, but we can right history.” Ernest A. Finney, Jr., who initially represented the men, was selected that same year as the first African-American Chief Justice for the State of South Carolina since Reconstruction.

The Friendship Nine were successful in attracting national media attention, but Rock Hill’s deep-seated segregation persisted. As a response, in May of 1961, Freedom Riders came to York County. 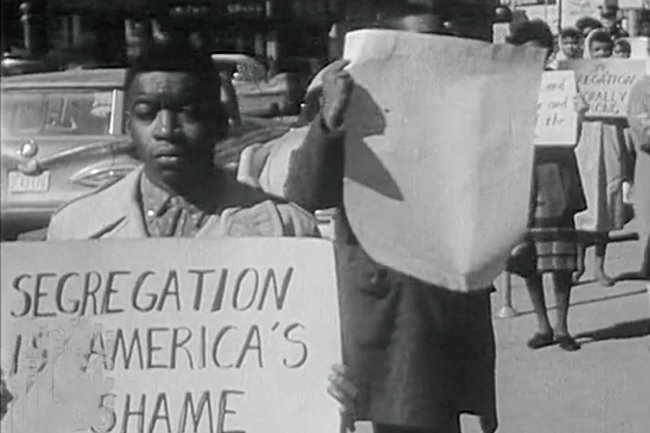 Freedom Riders were Civil Rights activists who rode buses into segregated areas to challenge those who refused to comply with Supreme Court decisions overturning segregation in the cases of Morgan v. Virginia (1946) and Boynton v. Virginia (1960). Southern states blatantly ignored these rulings, and the federal government had done nothing to enforce them.

Thirteen Freedom Riders boarded buses in Washington, DC, and when Civil Rights leader John Lewis and another black man exited the bus in Rock Hill, they were ambushed. A mob of white men attacked them, knocking them unconscious for attempting to enter a “whites only” waiting room. The mob was led by a member of the Ku Klux Klan named Elwin Wilson. This event was also the subject of nationwide media attention.

In 1987, John Lewis became a US Congressman in Georgia. He returned to Rock Hill in 2002 where he was invited to speak at Winthrop University. During the ceremony, Lewis was given a key to the city for his contributions to the Civil Rights Movement. In February of 2009, Lewis sat down with his former attacker, Elwin Wilson, where he received an apology on national television from Wilson, who said he had realized the error of his ways.