Now in Rock Hill, Winthrop University was founded in 1886 as the Winthrop Training School for Teachers by Dr. David Bancroft Johnson. The school was originally located at Ainsley Hall in Columbia. The Columbia Theological Seminary, now in Atlanta, was also housed on the same property at the time. The Winthrop Training School first met in a carriage house on the Ainsley Hall estate and was named for Robert Charles Winthrop, a noted philanthropist and head of the Peabody Education Board. 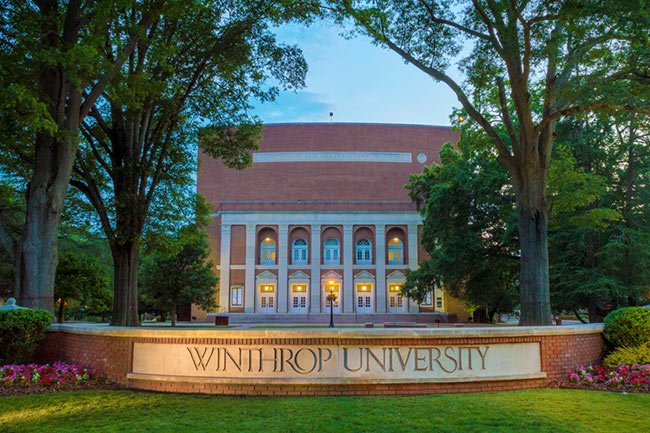 Brandon Sewell of Greenville, 2014 © Do Not Use Without Written Consent 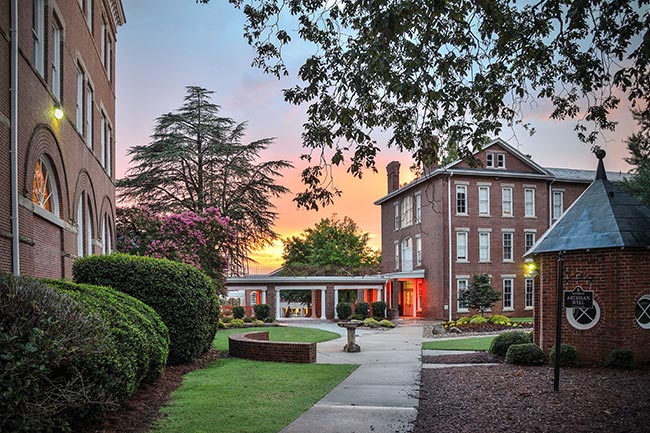 Steve Moore of Rock Hill, 2012 © Do Not Use Without Written Consent

The pictures below shows Tillman Hall, the first building constructed on Winthrop’s Rock Hill campus. Originally called Main Building, Tillman Hall was completed in 1894 and is one of the few remaining examples of Richardsonian Romanesque architecture in South Carolina. The building was renamed in 1962 to honor former South Carolina governor Benjamin Tillman. Tillman was an early advocate for the school. 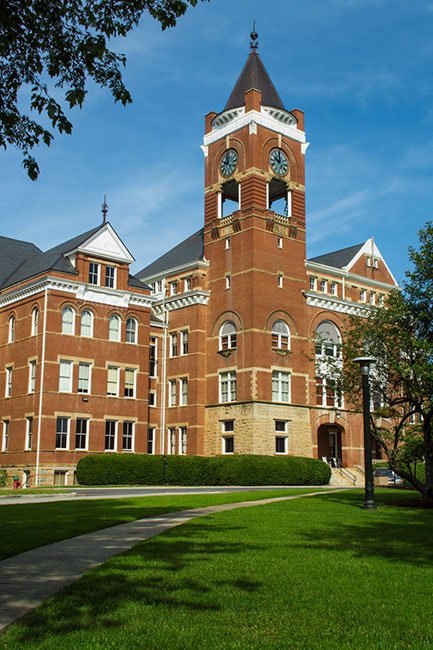 Brandon Sewell of Greenville, 2014 © Do Not Use Without Written Consent

Tillman’s legacy in helping to establish Winthrop and Clemson University, which also has a Tillman Hall, is often overshadowed by his actions as a white supremacist who participated in violent events such as the Hamburg Massacre. Tillman also called for the 1895 South Carolina Constitutional Convention, which disenfranchised black voters and segregated South Carolina schools. 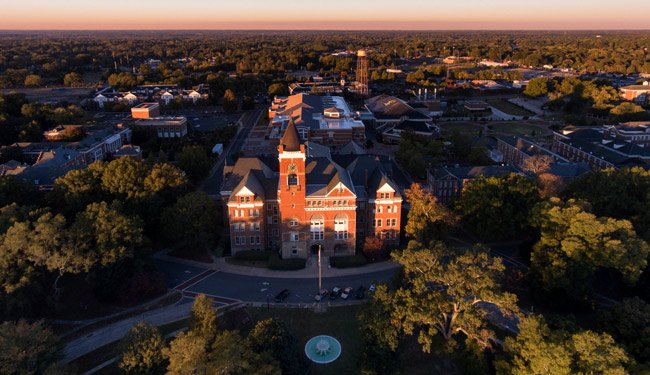 Peter Krenn of Rock Hill, 2016 © Do Not Use Without Written Consent

This Gothic Revival building is home to the Richard W. Riley College of Education. The college is a fitting occupant of the historic structure, which was added to the campus in 1912 to serve as the Winthrop Training School for Teachers. 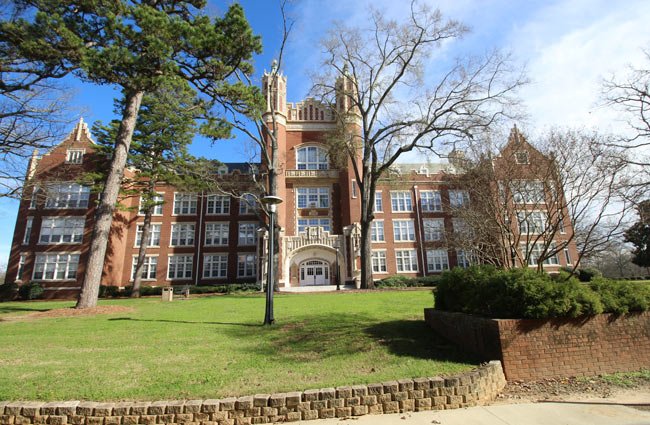 Kimberly Huntley of Taylors, 2015 © Do Not Use Without Written Consent

As noted above, when Winthrop moved to Rock Hill, students met in Main Building, or what is now known as Tillman Hall. As the student body grew, the college needed more space and in 1910 acquired the former Presbyterian High School, built in 1891. In 1912, the structure was significantly enlarged. The new design was created by Atlanta architectural firm Edwards and Sayer and funded by both the state and private groups such as the Carnegie Foundation, the Peabody Fund, and J.P. Morgan.

A gymnasium was added to the rear of the building in 1952; it was renovated in 1996 as the Student Activity Center. In 1960 the Women’s Training School was renamed the Withers Building in honor of Sarah Withers, an alumna and former principal of the school. The 1912 building was attached to the former Presbyterian High School by a brick connector in 1972; the connector was designed by Rock Hill resident Paula Treder.

The Withers Building is listed in the National Register:

(Winthrop Training School) The Withers Building on the Winthrop College campus, formerly the main building of the Winthrop Training School, was first built in 1891 as the Presbyterian High School. Its most architecturally significant portion was added in 1912-13 after the design of Edwards and Sayward, architects of Atlanta, and was further enlarged in 1952 with the addition of a gymnasium. The Withers Building is architecturally significant for its fine Gothic Revival design and historically significant for its association with Winthrop College, one of the prime innovators in teaching methods and teacher training in the Southeast.

The architects drew inspiration from the fifteenth and sixteenth century Gothic buildings of England, such as Hampton Court Palace and St. John’s College, Cambridge, for the design of the Withers Building. The composition of the building, with four story central tower and end pavilions, as well as the details of the brickwork and of the terracotta ornament, are drawn from these Tudor precedents. The main entrance to the building, with its four-centered arch, and the four octagonal turrets at the corners of the main tower, is embellished with high quality terracotta sculpture. The Withers Building is located on the highest eminence in Rock Hill and was designed to take full advantage of this elevation. The building was renamed for Sarah Withers, alumna and former principal, in 1960.

Now on the campus of Winthrop University, this building, known affectionately by locals as “Little Chapel,” was built in Columbia around 1823 as a carriage house. The brick structure was designed for the estate of Englishman Ainsley Hall by noted architect and South Carolina native Robert Mills. It originally sat behind the Hall mansion, now known as the Robert Mills House for its celebrated architect. Hall died before his grand home was finished, and the property was sold to the Presbyterian Synod of South Carolina and Georgia. Columbia Thelogical Seminary opened in the Robert Mills House in 1830, and the carriage house seen here was used as a chapel. 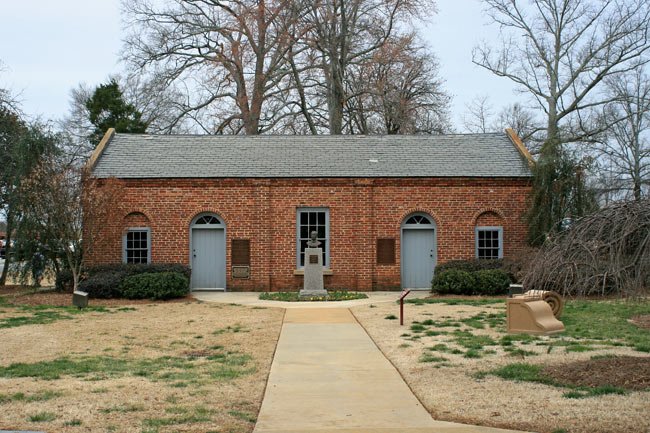 Many of the state’s most illustrious Presbyterian ministers taught at the seminary, including Dr. James Thornwell, for whom the Thornwell Home for Children in Clinton is named, and the Reverend Joseph Ruggles Wilson, father of President Woodrow Wilson. In fact, the Woodrow Wilson Home in Columbia is located not too far from the former seminary site. Though President Wilson lived in Columbia for just four years during his boyhood, he is said to have professed his acceptance of Christ in this chapel in 1873 while residing near the seminary. President Wilson remained a member of neighboring First Presbyterian of Columbia for the duration of his life. 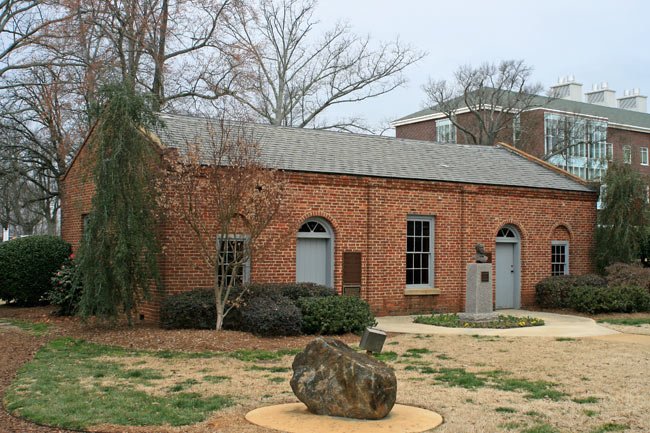 In 1886 another school was founded on the campus of the Columbia Theological Seminary by Dr. David Bancroft Johnson. Called the Winthrop Training School for Teachers, classes were held in the seminary chapel until the school was moved to Rock Hill in 1895. When the seminary relocated to Atlanta in 1927, the Ainsley Hall estate sat unoccupied. In 1936 the seminary donated the chapel to Winthrop, which moved the structure to its Rock Hill campus. The chapel was dismantled and rebuilt during the move. 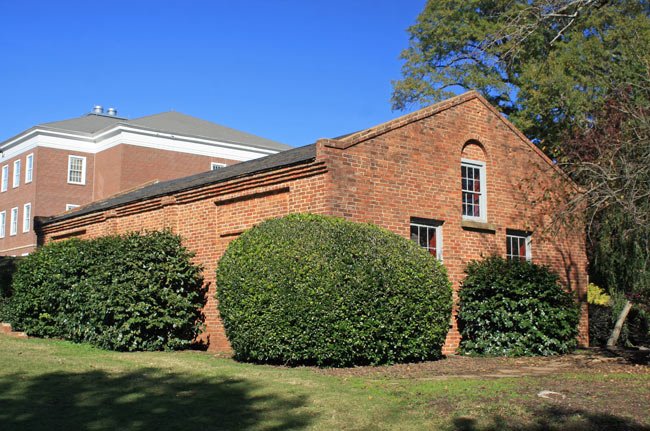 Today the building serves the students of Winthrop University as a chapel, following its roots as a sanctuary and a Winthrop building. The chapel was restored in 2005, with a bronze bust of Winthrop University founder Dr. David Bancroft Johnson gracing the entrance. The green space in front of the chapel exhibits a sculpture garden and is also the site of an amphitheater. 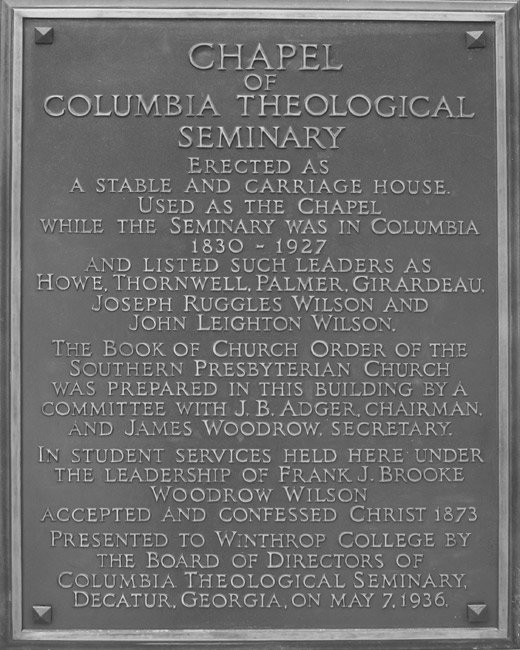 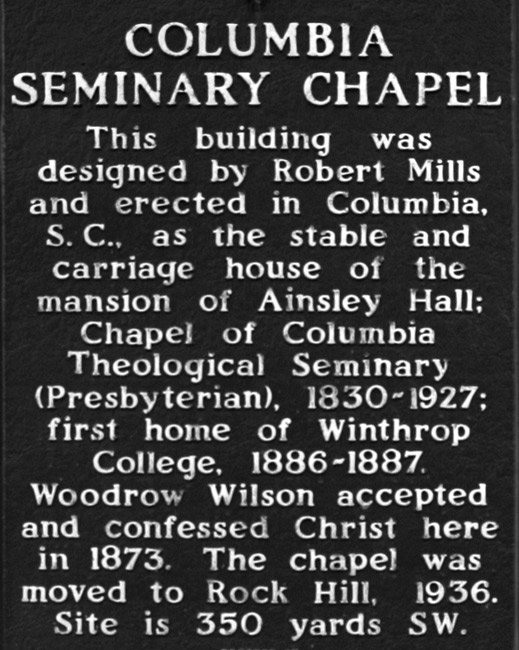 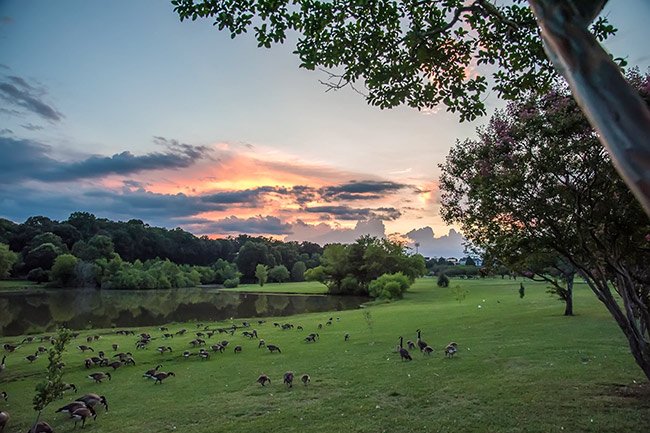 Steve Moore of Rock Hill, 2018 © Do Not Use Without Written Consent 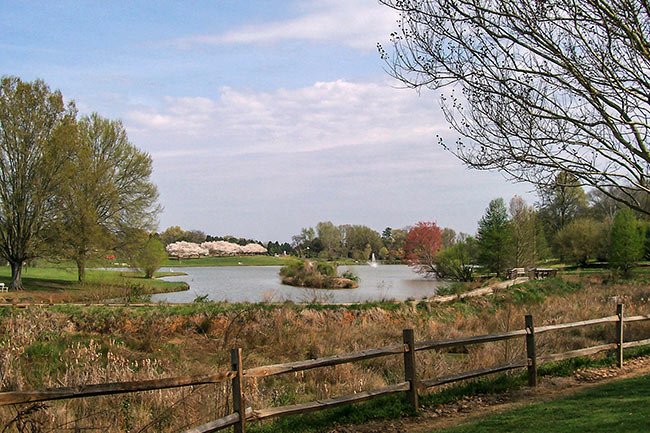 Carol Gant of Huntersville, NC, 2008 © Do Not Use Without Written Consent 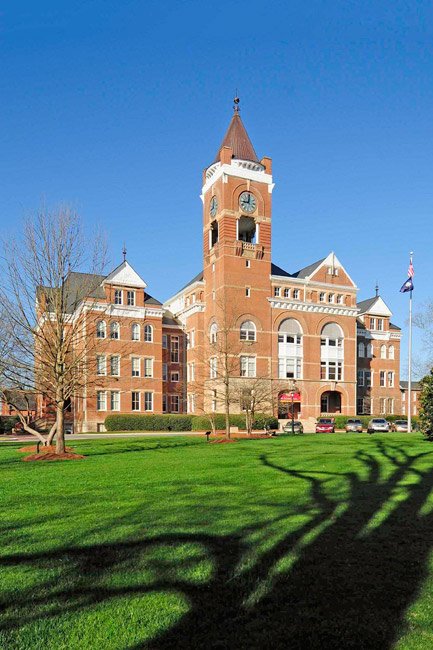 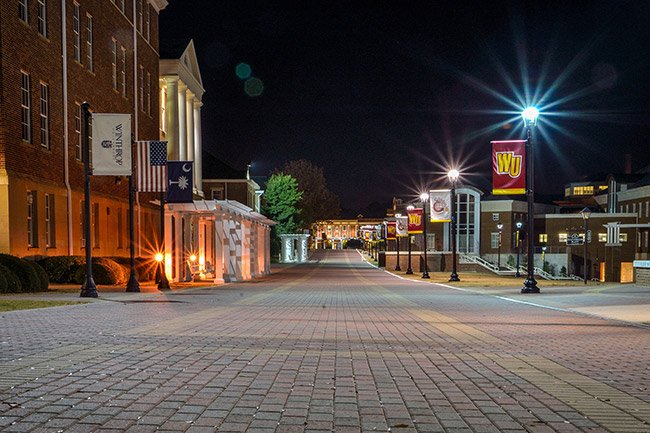 Steve Moore of Rock Hill, 2012 © Do Not Use Without Written Consent

In addition to Withers Hall, featured above, many other buildings on the Winthrop campus are listed in the National Register. These are combined together as the Winthrop College Historic District:

The Winthrop College Historic District includes twenty properties of historical and architectural merit that were constructed between 1894 and 1943 and that reflect the growth and development of the college as an innovator in education in South Carolina. These properties include academic classrooms, administrative and dormitory buildings, and an amphitheater. The historic district is significant as the first state-supported college for women in South Carolina, for its dominant role in the education of teachers for the state’s white public schools, and for its innovations in teaching methods from 1895 through the 1930s. The district is architecturally significant as an unusually intact collection of late nineteenth and early twentieth century college buildings. Prominent architectural styles exhibited include Gothic Revival, Richardsonian Romanesque, Classical Revival or Neo-Classical, and Neo-Georgian or Colonial Revival. Winthrop was named in honor of the chairman of the Peabody Education Foundation, Robert C. Winthrop, who had done much to help Dr. David B. Johnson, superintendent of the Columbia Graded Schools, to organize the Winthrop Training School in 1886.

Originally located on the grounds of the Presbyterian Theological Seminary in Columbia, Winthrop was chartered by the state legislature in 1887, with Dr. Johnson as President and Governor Ben Tillman as chairman of the Board of Trustees. In compliance with the Peabody Education Foundation Board, the Winthrop Board of Trustees tendered the college to the state in November 1891, making it the first state-supported college for women in South Carolina. In 1893 the college was renamed the Winthrop Normal and Industrial College of South Carolina. The college opened in Rock Hill in 1895. In 1920 the name was changed to Winthrop College, the South Carolina College for Women. The college became a co-educational institution in 1974 and is now known as Winthrop University.