This historic cemetery in Due West was likely the first in the area, established around 1820 when Abbeville County was known as Abbeville District. Many of Abbeville District’s earliest families are interred here, including the Pratt family, from which former president Jimmy Carter descends. Also of note are the headstones, which reflect funereal art and customs from the nineteenth century. The cemetery includes 107 graves marked with inscribed stones, around 60 graves marked with rocks, and an undetermined number of unmarked graves. 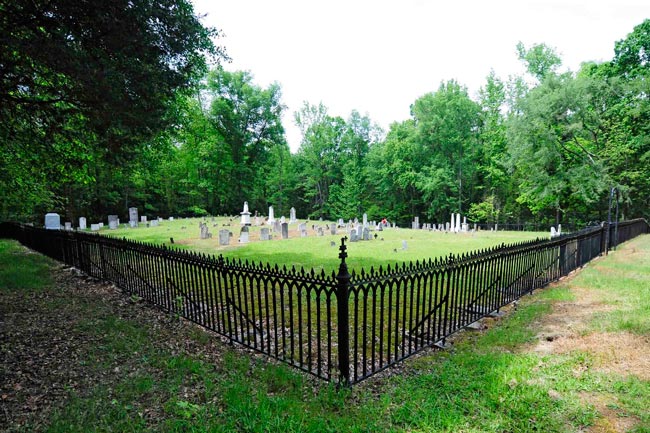 Lindsay Cemetery is listed in the National Register:

Lindsay Cemetery, established ca. 1820, is significant as the first cemetery in the Due West vicinity of what was then Abbeville District, and for its association with seventeen prominent early families of Abbeville District (later Abbeville County), from the early through the late nineteenth centuries. It is also an excellent intact example of an early-nineteenth through early-twentieth century cemetery reflecting typical burial customs and gravestones of the period. Lindsay Cemetery contains approximately 107 graves with inscriptions, approximately sixty graves marked with stones or rocks, and an unknown number of unmarked graves. The marked graves are predominantly headstones and footstones, most of them marble tablets although obelisks and table-top tombs are also present. The earliest marked grave is from 1820 and the most recent marked grave is from 1927, but most graves date from 1829 to 1892. The stones are arranged for the most part by nuclear or extended family units within the cemetery boundaries, but without formal stone, brick, or iron plot enclosures. The cemetery is enclosed by an elaborate four-foot high cast iron fence featuring Gothic pointed arches, spearpointed top rail, and large floral finials decorating its four corners.