These historic courts in Aiken‘s Winter Colony were built in 1902 for the city’s wealthy visitors from the North. The exclusive club was incorporated in 1898 as the Aiken Club and funded by New York financier William C. Whitney, who had been charmed by Aiken after purchasing the opulent property now known as Joy Cottage. 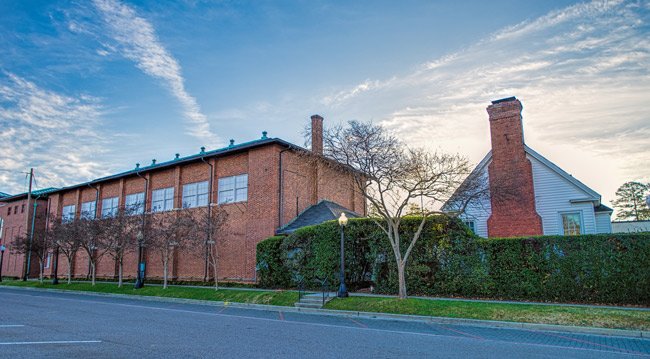 Anthony Gouge of Aiken, 2015 © Do Not Use Without Written Consent

Whitney and his affluent northern counterparts found the mild climate and loamy soil in Aiken suitable for training and racing thoroughbreds. They also introduced and established polo in the area. Whitney figured the gentleman’s sport of court tennis would also prove to be popular in the Winter Colony, and he was right. The club soon attracted a number of prominent members, including Thomas Hitchcock.

Court tennis, an indoor game, continues to be played in the brick building seen above. The Aiken Club is one of only nine such court tennis clubs in the United States. The game originated in France in the Middle Ages and is the predecessor of modern lawn tennis.

The Aiken Tennis Club is listed in the National Register as the Court Tennis Building:

The Aiken Club, an exclusive men’s club, was incorporated in 1898 and constructed its court tennis building about 1902. Court tennis, played on an indoor court utilizing the walls and ceiling, is an elite sport originated in France over 700 years ago. The Court Tennis Building is one of only nine courts in the United States. Constructed ca. 1902 and remodeled ca. 1936, it is a two-story rectangular brick building with a hip-on-hip roof. The Newberry Street elevation (northwest elevation) features seven bays delineated by buttressed wall pilasters. All bays have double eight-over-eight windows in the upper portion. The southeast and southwest elevations feature one-story frame, shingled wings. The wing on the southeast connects the Court Tennis Building to the Aiken Club Room, a small one-story, frame, gable roofed cottage that was moved to its present location ca. 1928. The Aiken Club Room was originally part of the Aiken Club building which, along with stables, a squash court, servant’s quarters and the tennis court made up the Aiken Club complex. Early members of the Aiken Club included Thomas Hitchcock and William C. Whitney.