This photo shows the residence of Anderson Cotton Mill supervisor Lee Talmadge Embler. It was taken on January 17, 2015 – two days before the house burned to the ground. 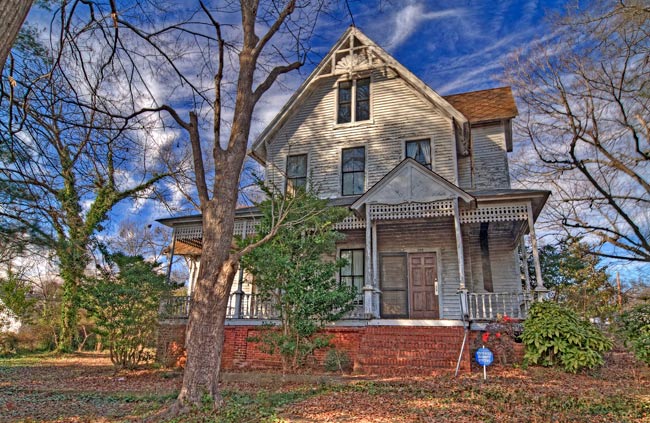 South Carolina’s Upstate made an ideal location for textile mills in the nineteenth and early twentieth centuries. The area’s proximity to water power (via rivers and falls), railroads, and prolific cotton crops meant that multiple mills sometimes developed within one town. In Anderson, the Anderson Cotton Mill was one of a several textile mills established. Along with neighboring Equinox Mill and Appleton Mill, a prosperous community developed.

Abney Mills, a company founded by Greenwood native John Pope Abney, bought many textile mills throughout the Southeast during the twentieth century, including Anderson Cotton Mill. As a result, several such mills were also called Abney Mill. Anderson Cotton Mill – or Abney Mill – closed in 1991, leaving a void familiar to many South Carolina communities that had depended on their mills for prosperity.

Mr. Embler, who was born in 1914, remained in the home until his death in 2001. In 2003 a developer from Columbia bought the Embler home, which looked out from atop a prominent hill to oversee the mill village, with plans to rent it. The home had sat vacant prior to the fire.

We are grateful to William H. Myers, III for capturing this stately home before it was lost to fire.