This building no longer serves as a funeral home. Sullivan-King Mortuary is now located at 3205 Highway 81 in Anderson. Please respect the privacy of this building’s current owner. Thank you!

This Beaux Arts-style building was designed by James Knox Taylor and built as the first federal post office in downtown Anderson in 1909. In 1941, when the post office moved to a newer building on the same street, this structure became the site of the McDougald-Bleckley Mortuary. The mortuary had operated from a storefront, also on Main Street, since 1923. The business was founded by J.S. McDougald and run by McDougald and his partners, B.B. Bleckley and D.L. Reid. Later Sam O. Sullivan purchased an interest in the mortuary and become its vice president. In 1930, after McDougald passed, Bill King became the manager. When Bleckley died in 1935, King became a stockholder along with Reid and Sullivan. The business’s name changed to Sullivan-King Mortuary in 1949. 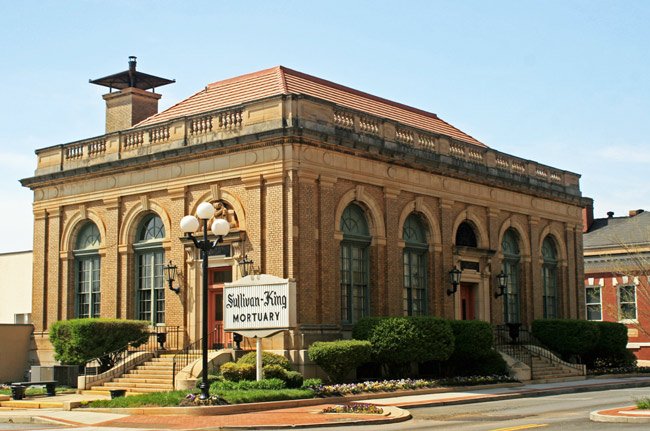 Both Sullivan and King died in 1969 within three weeks of each other. Jack D. Gilliland, who had been with the company since 1952, then became president. The business was eventually sold to David King, son of Bill King, and Bolt McClain. The partners retained the Sullivan-King name, renovating the former post office in 1997 and opening another location on South Carolina 81 in 2000. In recent years, Sullivan-King Mortuary closed this downtown location and now operates solely from its new location. Sosebee Mortuary then operated from the historic building, but it has since relocated as well. 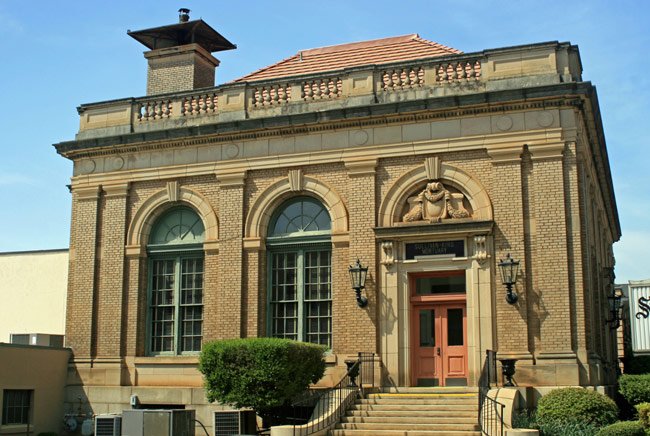 The Sullivan-King Mortuary is listed in the National Register as part of the Anderson Downtown Historic District:

The Anderson Downtown Historic District is primarily significant as a well-preserved late nineteenth/early twentieth century commercial area. The district retains a typical town plan with a courthouse square in its center, as well as numerous good examples of Victorian, Romanesque Revival, and Beaux Arts commercial architecture. Anderson, incorporated 1833, is also significant for its role as a commercial, governmental, and cultural center for Anderson County. The Anderson Downtown Historic District is comprised of approximately 97 commercial structures, the County Courthouse, the Anderson City Hall, a Victorian fountain, and two historic monuments. The brick constructed structures date primarily from the late nineteenth and early twentieth centuries, and are located in the heart of Anderson’s central business district. The courthouse and surrounding square serve as the focal point of the historic district.

Reflections on the Sullivan-King Mortuary

Barbara Bailes Hairfield of Charleston shares the following reflection: “The old federal building built as the Anderson Post Office was purchased by my grandfather, George H. Bailes, Sr. in 1938 when the post office moved to a new location. G.H. Bailes was one of the founding merchants of Anderson and operated a large department store which had the first escalator in South Carolina. Because he decided Anderson deserved an elegant building for a funeral home, my grandfather bought and leased his building to Jess McDougald and Bleckley to open a mortuary business. The McDougald, Bleckley, Sullivan, and King families leased this building at 401 North Main Street in Anderson from the family of G.H. Bailes, Sr. for 71 years until they consolidated their business.”