Many motorists who cross Awendaw Creek along US 17 believe this abandoned shrimp boat was stranded by Hurricane Hugo. On the contrary, it has never voyaged into the sea. 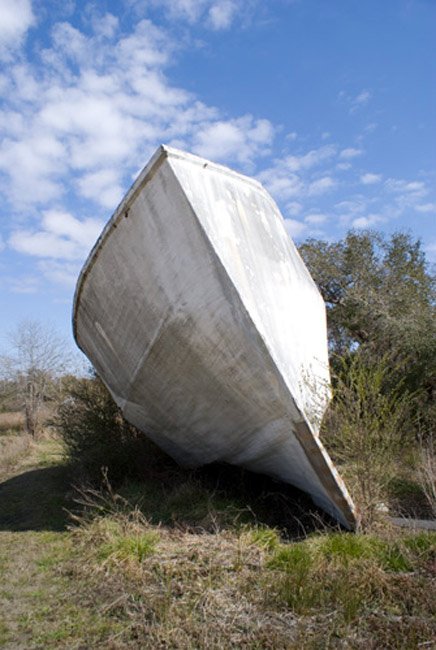 Awendaw suffered serious destruction – along with neighboring McClellanville – when the Category 4 storm struck on September 21, 1989. In the aftermath of the hurricane, many boats, large and small, were tossed from creeks onto nearby shores, creating eerie scenes much like the this one. Since then, some folks have assumed that such was the case with the hull seen here. The truth, however, is that this trawler has been sitting in the same spot since the 1970s, more than a decade before Hurricane Hugo changed the landscape of the South Carolina Lowcountry.

The boat, nicknamed the “Awendaw Ark” by some, is the handiwork of local resident John Dunn. Dunn and his wife moved to Awendaw in the 1960s and opened a general store. When the local shrimping industry experienced a surge in the 1970s, Dunn thought it might be a good time for his son to enter the business. Instead of purchasing a shrimp boat, which would have required at least $200,000, Dunn decided to build one for less. In 1975, Dunn began constructing this 68-foot-long boat behind his now-vacant storefront. Unfortunately, after working for two years on the project and investing more than $50,000 in materials, Dunn was unable to complete it. For years, the would-be trawler leans abandoned on its side. However, it has recently been removed.