The African Methodist Episcopal – or A.M.E. – denomination is often associated with Emancipation and the Reconstruction Era in South Carolina because prior to these years, most African-Americans in South Carolina were enslaved and worshiped with their owners. An 1834 law prohibited African-Americans from worshiping independently of white supervision – even if they were free – due to a thwarted slave uprising discovered in 1822 and organized by freed slave Denmark Vesey. However, the A.M.E denomination, organized in 1816 in Philadelphia, had already taken root in the South, and members such as the congregation of Charleston‘s Emanuel A.M.E. Church met in secrecy until the end of the Civil War. 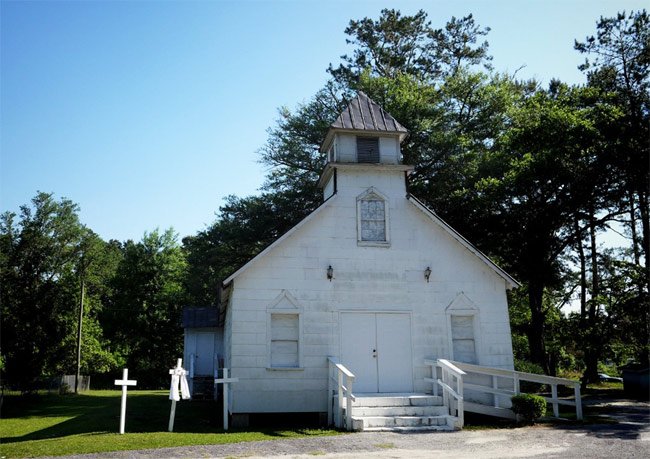 After the war, newly-freed African-Americans joined the many A.M.E. churches that were being established all over the South. Leaders from the Baltimore Conference of the A.M.E. church dispatched ministers, including Daniel Payne and Richard Cain, to found new churches in the South Carolina Lowcountry. Reverend Cain is said to have organized at least one A.M.E. church in the Saint James-Santee area – Bethel A.M.E. Church in McClellanville, which was founded in 1867. Howard A.M.E. church, pictured above, is located near both Bethel A.M. E. Church and Hampton Plantation, though we do not yet know whether it was associated with Reverend Cain.

In fact, just about the only info we can find is that the property deed is dated January 1, 1943. If you have any other information on Howard A.M. E. Church, please share it with us here!