This small brick sanctuary on Yonges Island near Meggett is home to the congregation of St. Mary’s Catholic Church. The church was started by Father Daniel Quigley in the mid-nineteenth century on Wadmalaw Island. It was originally known as St. Philomena’s. The first wedding to be held at St. Philomena’s was recorded on February 9, 1872, placing the founding of the church likely in 1871. The original sanctuary was likely built around that time. Over the years the population on Wadmalaw Island dwindled while that of neighboring Yonges Island grew due to its proximity to a railroad. In response, St. Philomena’s relocated its church to Yonges Island, which was dedicated at its new site on May 12, 1885 (another account places the move in 1892). 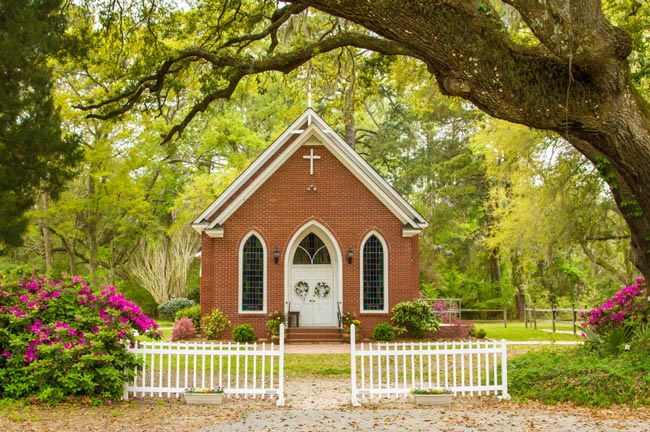 Kathy Hare of Charleston, 2016 © Do Not Use Without Written Consent

The parishioners of St. Philomena’s were uprooted again in 1911 when a hurricane destroyed their church. As the congregation worked towards building a new sanctuary, members met in private homes and even in a local store. Finally in 1914, the present church was erected on a nearby lot on the same road; it was renamed St. Mary’s at the behest of a donor. The church was built of white clapboard and eventually bricked. Stained glass from the original church was salvaged after the hurricane and placed behind the altar. While the church is surrounded by the natural beauty of Yonges Island, the grounds are accented with religious iconography such as a rosary garden and a grotto to Mary built in 1942 of coral rock from Edisto Beach. Today St. Mary’s has an active membership of around 60 families.