This early nineteenth-century home in the rural Adams Run community is thought to be the oldest home in the former planters’ retreat village. Built around 1830 by William Wilkinson, it served as a getaway from the heat and mosquitoes that plagued most Lowcountry plantations during the summer months. Wilkinson’s plantation, named Summit Plantation, was located about six miles southeast from his village home in Adams Run. As one of the first to build in the retreat community, Adams Run was initially called Wilkinsonville before being changed to Adams Run by the mid-nineteenth century. 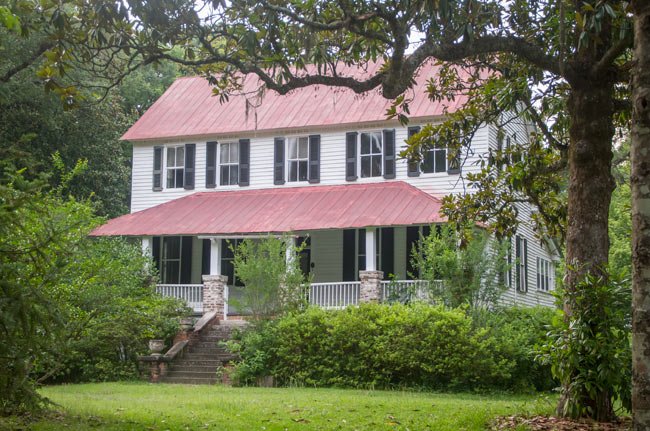 During the Civil War, the home was used as the headquarters of Confederate Brigadier General Nathan George “Shanks” Evans and later by Colonel Johnson Hagood. The home was sold to merchant Gabriel Henry Barnwell in 1889 and remained in the Barnwell family until 1923. It was then sold to Milton Carroll Boineau and his mother, Esther. Milton Carroll Boineau purchased his mother’s half of the property in 1929, shortly after his marriage to Myrtle Hughes. The home underwent several modifications the following year, including a one-story addition to the rear and the conversion of part of the central hallway into a living room. Carroll and Myrtle’s son, John, owned the home until his 2014 death. At that time, the house was purchased by the South Carolina Battleground Preservation Trust due to its role in the Civil War.

John Boineau not only inherited his parents’ Adams Run home, but he purchased the former Summit Plantation in the 1960s. Both John and Carroll Boineau were master craftsmen, and the younger Boineau restored much of Summit Plantation himself and also made several pieces of furniture within the home. His daughter now owns Summit Plantation.

The Wilkinson-Boineau House is listed in the National Register:

The Wilkinson-Boineau House is significant as an excellent example of an early nineteenth century Greek Revival secondary residence with minor twentieth century alterations. It is also significant as the first house built in a summer planters’ village established ca. 1830 by William Wilkinson, a lowcountry planter in whose honor the community was first named Wilkinsonville. Wilkinson lived for most of the year at his plantation on Swinton Creek, approximately four miles southeast of Adams Run. Milton Carroll Boineau acquired the property in the 1920s. The Boineau’s built a one-story, three-room rear addition and removed a portion of the central hall in the 1930s. The house is a two-story wood frame residence on high brick piers. The original (ca. 1830) portion of the house was a two-story central hall single pile residence with a braced timber frame. A one-story hip-roofed porch, accessed by high brick steps, spans the breadth of the entire façade. The house has square edge weatherboarding and a tall lateral gable roof with a half-moon louvered vent in each gable end, and dentil molding under the eaves on the façade and rear elevation. The original windows were nine-over-nine double-hung sash, but were replaced with two-over-two double-hung sash in the 1930s or 1940s. The roof is corrugated metal.