Chester‘s City Hall has long been a center of political and civic activity. Over the years, it has served as the city’s jail and its fire station. The third floor was designed as an opera house, but it also hosted community talent shows, graduations, recitals, and concerts. In 1929 a fire devastated the building, destroying the opera house and many valuable books and documents stored there. The Chester County Library was fortunately able to salvage about 700 books from the building after the fire, which it still has today. The opera house was not rebuilt in the renovation. The Chester City Hall building was constructed around 1890 by Frank Munson of Columbia. The building’s architecture is described as Romanesque Revival because of its elaborate facade and brick design. 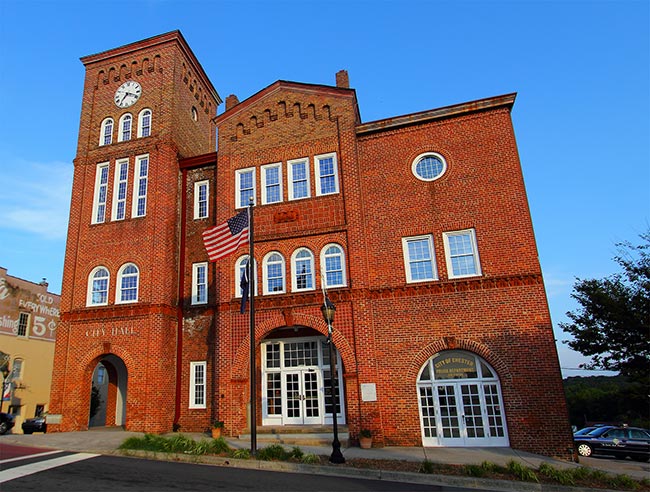 Joseph C. Hinson of Lancaster, 2011 © Do Not Use Without Written Consent

Chester City Hall is listed in the National Register of Historic Places:

Built in 1890-91 by Columbia architect, Frank Munson, the Chester City Hall and Opera House has a long history of cultural and civic activity. The building’s extensive and elaborate use of brick and principal construction material enhances its massive Romanesque Revival style. The façade is arranged in three distinct phases. The tower at left dominates the gabled central section which in turn dominates the less ornate section on the right. Originally all three entrances of the façade were recessed, Roman arches with ornate keystones and voussoirs formed by one stretcher/one header design. A stringcourse between the first two floors has a foliated design. Since 1891, this building has been the hub of Chester’s political activity. The town’s administrative offices have been located here since the building’s construction. The city jail and fire department had also used the building before moving to new facilities. The third floor was originally designed for use as an Opera House complete with gallery, box seats, dress circle and pit seats. The Opera House was also the scene of many community festivities such as talent shows, graduation exercises, recitals and concerts. When the interior was renovated following the 1929 fire, the Opera House was not restored. The fire also destroyed the original spire tower which contained a four-faced clock.