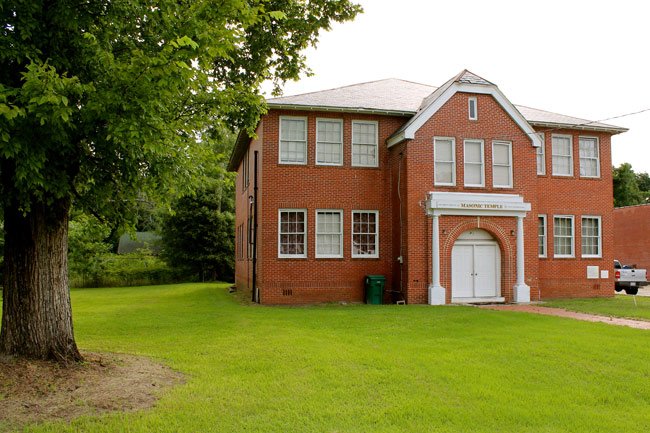 The school, which only had a few students when it began, originally met in the first building to house Second Presbyterian Church. In 1924 a brick building was constructed behind the church to be used as the Coulter Memorial School under the direction of Dr. G.W. Long, minister of the church as well as principal of the school during that time. Dr. Long and his wife, Lillian, worked to better the school, whose student population increased under their leadership from eight students in 1908 – the year the Longs arrived – to around 500 in 1943, the year of Dr. Long’s death. From 1933 through 1947 the school offered junior college credit, and in 1949 it merged with the public school system. The acendemy closed in 1955, and today the building is the home of the Freemasons’ Sanctorum Lodge Number 25.

The Coulter Memorial Academy is listed in the National register as part of the Cheraw Historic District:

Cheraw’s Director of Tourism and Community Development, David Sides, adds, “Coulter Memorial Academy was the first school for African Americans in Chesterfield County. Begun as a day school by the Reverend J.P. Crawford in 1881, the parochial school was sponsored by the Northern branch of the Presbyterian Church. The school became a co-educational boarding school with a high school and junior college. The academy had a peak enrollment of 509 in 1943, with students from five states in attendance. The school campus occupied much of the property along this section of Second Street including the land across the street from the academy – this included housing for the academy’s president and large gardens to provide all the vegetables to feed the students and school staff. The academy became a part of the public school system in 1949 and was last used as a school in 1955. It currently belongs to Sanctorum Lodge No. 25 (PHA). Also on this property and of special significance to Cheraw’s black history is the College Inn Restaurant. During the days of Coulter Academy, this establishment was the only place in town where blacks were welcomed to sit and enjoy a hamburger and a shake.”