This church in Society Hill was established in 1886 by local African-American Baptists. The congregation built this house of worship the following year in 1887. Its steps and foundation are painted blue, or what is known in parts of South Carolina as “haint blue.” Painting entrances light blue is a traditional Gullah practice. According to custom, malevolent spirits, called “haints,” do not cross water. The blue paint mimics water, therefore tricking the haints into staying away. 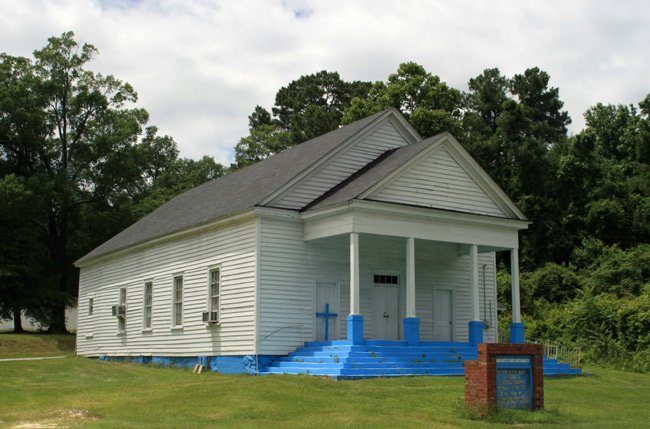 The church was built by the Reverend J.D. Douglass, Henry Postell, and Rueben Postell. Deacon Andrew Wines gave the church its name. The first Superintendent of the church was local teacher and merchant Lawrence Faulkner. Faulkner’s son, the Reverend Dr. W.J. Faulkner, served as Dean of the Chapel at Fisk University in Nashville, Tennessee. He was also the first African-American president of the National Association of College and University Chaplains. 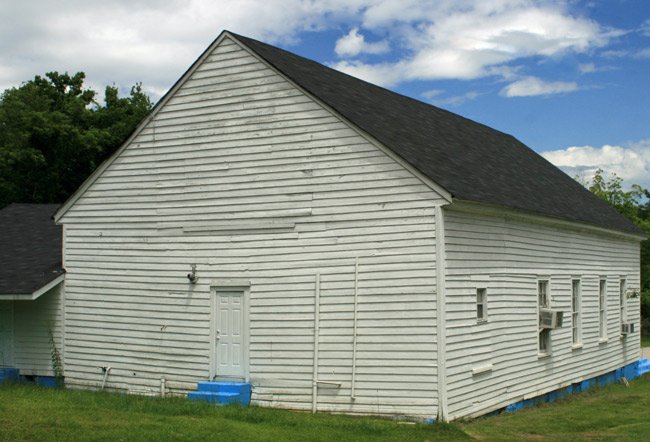 Another illustrious early member of Union Baptist Church was Zachariah (Zack) Wines, the congregation’s first clerk and trustee. Wines served in the South Carolina State House from 1867 through 1878. He also owned and operated a store across the street from the church and was the Postmaster of Society Hill from 1897 through 1904. Union Baptist Church still boasts an active congregation.

Below is an article that was contributed to the South Carolina Picture Project by Bill Segars of Hartsville. It originally appeared in his local paper, The Darlington New & Press. It was published on August 25, 2015.

As a building contractor I am typically more interested in the church building itself more than the congregation and the names associated with the church. I am learning that a building alone is not as interesting without people. People give a unique building personality. When you learn and understand what part people have played in the construction and life of the building, it then comes alive, something each of us can relate to.

This is the case with Union Baptist Church located at 305 Church Street in Society Hill. With no disrespect to the church building itself, some may look at it and say that it’s nothing special, it’s just an old building. If you’ll give me a few minutes of your time, I think that you’ll see this plain Meeting House style building will come to life with a personality, a purpose in being here. With that knowledge you then will be able to appreciate the building itself.

In order to enlighten you about Union Baptist Church, you must first understand the time and location where it was established. The people that lived near the church and walked to services held under its roof were very important to its growth. Shortly after the conclusion of The War Between the States, African Americans began to settle and build houses along Church Street in Society Hill. The Roadside Historical Marker across Church Street tell the story of Zachariah W. Wines, who built a store to serve the area. This building still exist today. This area of Society Hill was very quickly becoming a hub of activity. What better place to build a church building than here. In 1886 Union Church was established with 125 members.

The first deacons’ names were a Who’s Who list of the most prominent men in the area. Names like Littleton, Lewis, Wines, Poole and Evans placed their support behind Rev. J. D. Douglass to make Union Baptist Church a strong influence in the community. The church’s first Superintendent was Lawrence Faulkner, another store owner and businessman in Society Hill.

After reading this article, I’m sure that you will rush up to Society Hill. When you do, there is one other point of interest connected to Union Church that you must see. At 133 S. Main St. there is another Roadside Historical Marker. One side tells the story of Lawrence Faulkner and the other side tells the story of Simon Brown. Who is Simon Brown you may ask? As a child did you ever read the story of Brer Rabbit and His Friends? Simon told fascinating stories of “the animals that could walk and talk like men-folks”. Lawrence Faulkner’s son, William, later put these stories in print in The Days When Animals Talked. Oh my, there is so much history to read on the 13 Roadside Historical Markers in downtown Society Hill. Do yourself a favor, take the time to read these. Charleston and Columbia are the only other cities in South Carolina that have more roadside historical markers in this close proximity to each other than Society Hill does. How fortunate we are in Darlington County.

Back to Union Church. When it was established in 1886, Rev J. D. Douglass was called as its pastor. He not only accepted the challenge as its first pastor, he also agreed to be the lead carpenter for the construction of the building. He, along with brothers Henry and Rueben Postell built the church building and the interior pulpit furniture. These highly skilled carpenters did it all with the help of many members working together. The building itself does show signs of change. An educational space was added on the right side to meet their growth. Unfortunately the striking box steeple that was built at the rear of the building a short time after the original construction has been removed. The original 1892 McShane Bell is still on the property. The spaces between the field stone piers have been filled in with cement block as underpinning for the building. It has continued to be a spiritual inspiration to the community for many years, mothering other congregations, until its numbers begin to dwindle. However, its present congregations remains a beacon for the community in their regular services.

When I first visited Union Church in 2012, I was fortunate to be able the take the photo seen on this page. An important element of this building has changed since 2012. The blue foundation and steps have been paint white since then. This seemingly simple change from blue to white is far more significant than two different colors of paint. There is a legend behind the blue paint, or as the Gullah legend called it Haint Blue. Haints are spirits, or ghosts, trapped between the world of the living and the world of the dead. These are not the friendly, white-sheeted floating ghosts that you may see in the cartoons. These haints are the mean, evil, scary ones that you don’t want to mess with. They are seeking revenge for being stuck between life and the hereafter. Ones that you don’t want in your house and certainly not in your church. The Gullah people knew that these angry haints could not cross water, so short of digging a moat around their houses, they painted the foundations, window and door openings blue. The more blue, the safer the house was. Low-and-behold, it worked. This watery blue color confused and tricked the haints into thinking that the painted surface was water, and they didn’t enter.

Don’t get Haint Blue confused with porch ceilings painted blue; that’s another legend. Maybe we’ll find a church with a blue ceiling soon, stay with me.