This stately edifice in downtown Conway is the third to serve its congregation. The church was formed in 1866 when 10 founding members met in a local schoolhouse for worship. Within a decade, the congregation had grown large enough to sustain a Sunday school. In 1877 the congregation built its first church, a simple wooden building, on an acre of land donated by William Burroughs. 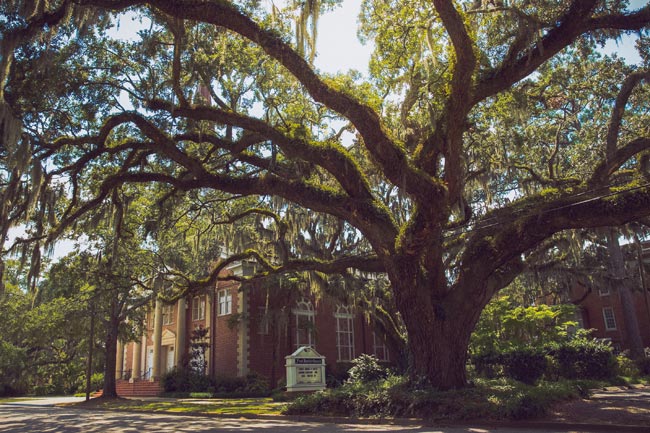 Benjamin Coy of Myrtle Beach, 2014 © Do Not Use Without Written Consent

In 1906 the wooden church was moved to the back of the lot to be used as a parsonage, while a new brick church was built in its place. By 1939 an educational building had been added. This church housed the membership until 1951, when the present sanctuary was completed, and another educational building was added in 1960. The church, which remains an active, vital part of Conway, was instrumental in helping form four other mission churches in the 1940s and 1950s.

Conway First Baptist Church is listed in the National Register as part of the Conway Residential Historic District:

The Conway Residential Historic District is architecturally significant as an excellent and varied collection of quality nineteenth and twentieth-century residential buildings. The Conway Residential Historic District illustrates the residential development of the city of Conway from the mid-nineteenth century until ca. 1955. Most buildings within the District were constructed in the late nineteenth and early twentieth centuries during a period of great growth and development in Conway.

The District includes residential architectural styles from the mid-nineteenth century Greek Revival and Carpenter Gothic Revival to the Queen Anne and Italianate houses of the Victorian era, from the Neo-Classical of the turn of the twentieth century to the large and more modest Craftsman bungalows of the 1920s, from the Tudor and Colonial Revival of the 1920s and 1930s to the post-World War II Minimal Traditional forms and late Colonial Revival and Neo-Classical Revival houses of the 1950s. The District also contains four apartment buildings, one school, a church, and a Confederate monument. Altogether the District includes 125 buildings and one object that contribute to the architectural and historic character of the District, and thirty-seven buildings that are less than fifty years old or significantly altered in such a way that they do not contribute. The presence of ancient live oak trees and other landscape features in and along its streets give definition and character to Conway’s oldest neighborhood.