This historic bridge with Gothic-style arches was built in 1937 and takes travelers across the Waccamaw River in Conway and is a focal point of the Conway Riverwalk. The bridge replaced an earlier one-lane structure that at the time was the only road access from Conway to the then up-and-coming Grand Strand resort of Myrtle Beach. During this period in the 1930s the South Carolina highway system was booming, and the increased traffic – especially to the beach – called for a larger bridge. 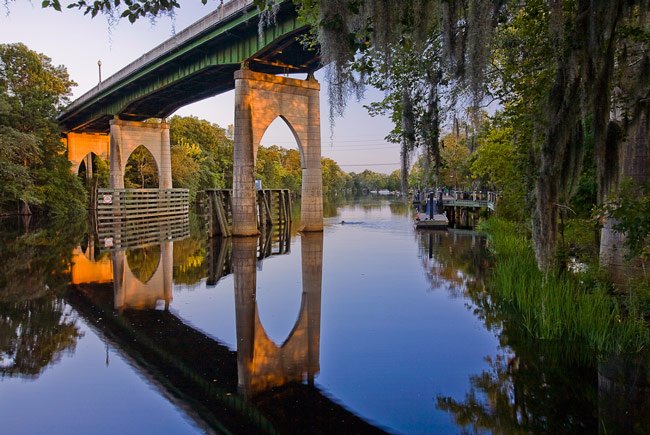 The bridge was designated as a memorial to Horry County veterans of war from the American Revolution through World War I. Around 15,000 people attended the bridge’s opening ceremony on April 1, 1938. The excitement over the new bridge is reflected in a poem written by Mrs. Charles R. Scarborough for the event, which begins:

The Bridge! The Bridge! It was opened today!
The handsome new bridge in the town of Conway
It is your bridge, and my bridge, and everybody’s, too
It is free for the crossing; it is welcome to you! 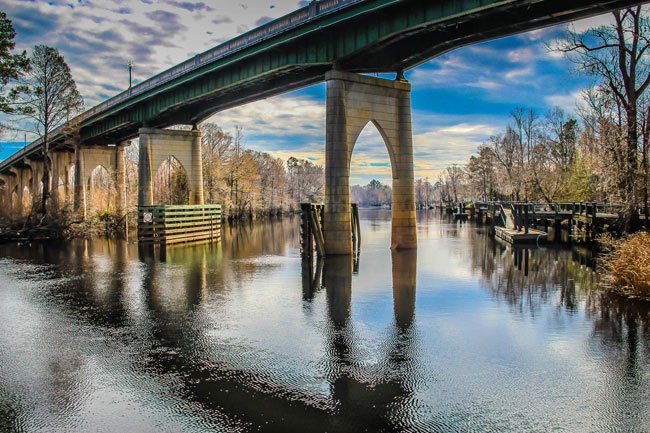 Sara Dean of Moncks Corner, 2017 © Do Not Use Without Written Consent

The 1,270-foot-long multi-span continuous steel girder bridge signified economic growth in South Carolina’s coastal counties. Chief Highway Commissioner Ben Sawyer, who served in that position from 1926 until 1940 and for whom the Ben Sawyer Bridge to Sullivan’s Island is named, stated, “The Coastal section should and could be made a play ground for the people of South Carolina and large numbers of people for neighboring states.” In regards to economic development, Sawyer went on to say that “the one essential prerequisite is more and adequate hard surfaced roads.” 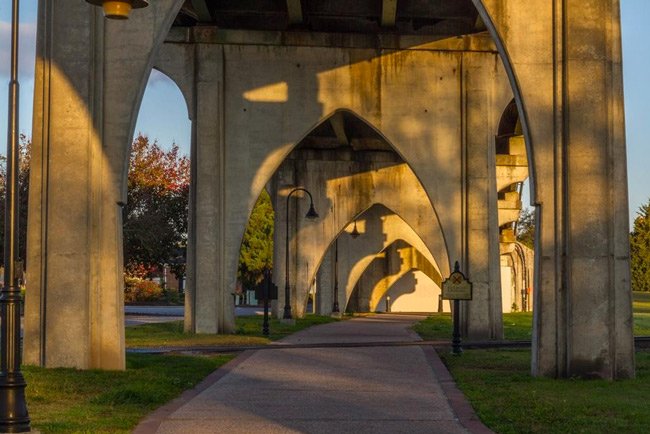 This new bridge, built at a cost of $370,000, did indeed lead to tremendous development. Its unique architecture and influence on the early growth of the Grand Strand region earned it a place in the National Historic Register:

The Waccamaw River Memorial Bridge, constructed in 1937 and opened to the public in April 1938, is locally significant as an example of engineering techniques and architectural design used in the construction of South Carolina highway bridges during a period of remarkable growth in the state’s highway system. It is a multi-span continuous steel girder bridge made up of four steel girder main spans, four continuous steel string approach spans, and concrete piers which support the bridge deck. The entire bridge is 1270 feet long.

Among its notable engineering and architectural features are its long vertical and horizontal curves, the use of 28 cast-iron light standards along the balustrade, and the Gothic-influenced pointed arches cut out of its concrete piers; the arches have been described as “a lavish treatment seldom seen in South Carolina bridges” in a 1993 bridge inventory project sponsored by the South Carolina Department of Highways and Public Transportation. The bridge was designated as a memorial to Horry County citizens who served in America’s wars from the American Revolution through the First World War. It is also significant for its association with the growth and development of the Grand Strand-Myrtle Beach area as a resort in the first half of the twentieth century. Constructed at a cost of $370,000, the bridge replaced an earlier one-lane bridge which had been the only bridge connecting Conway with the developing Grand Strand-Myrtle Beach area. 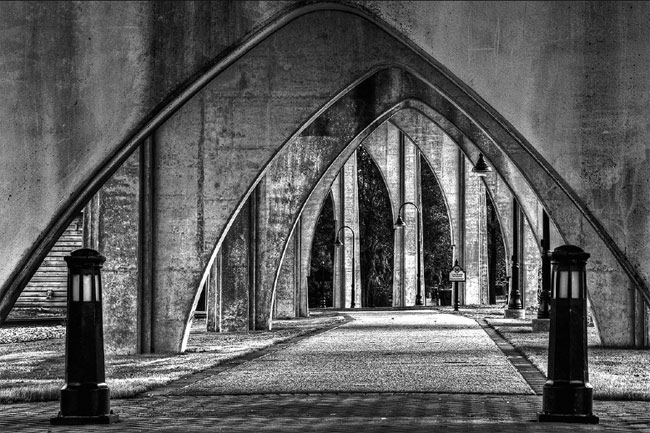 Chris Austin of Charlotte, NC © Do Not Use Without Written Consent

Contributor Susan Klavohn Bryant shares, “My sister and I were astonished at the gothic arches in the bridge supports. They look like something you would seein Europe.”