This rural stone church in Clinton was formed twelve years after Scots-Irish pioneers reached the area in 1752, making it the oldest church in Laurens County. John Duncan from Pennsylvania was one of the first people to arrive and help establish a community here, and by 1764 a group of settlers had organized Duncan’s Creek Presbyterian Church. 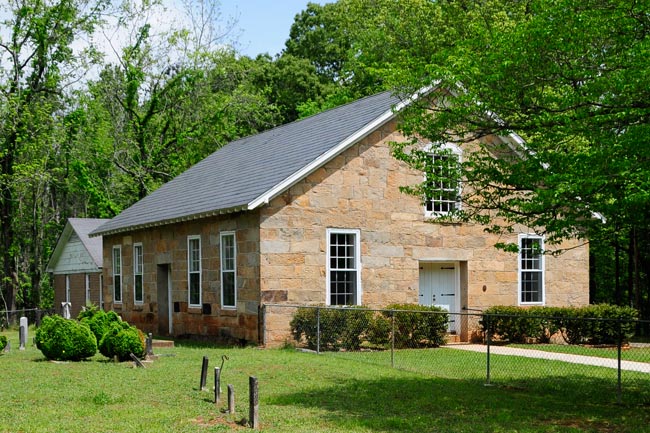 A few years later, members built their first church, a wooden structure. This church stood for more than seventy years until the current church, made of stone, was erected in 1842. Since then people have also referred to it as Old Rock Church. Duncan’s Creek Presbyterian Church remains much as it was when it was built, though a slave gallery was removed in the early twentieth century. Several other Presbyterian churches formed in the area as a result of Duncan’s Creek.

Many Revolutionary War and Civil War soldiers are buried in the churchyard of Duncan’s Creek Presbyterian Church. Its earliest headstone is dated 1776.

Duncan’s Creek Presbyterian Church is listed in the National Register, which adds the following:

(Old Rock Church) Duncan’s Creek Presbyterian Church, built ca. 1842, is one of the earliest examples of rural church architecture in the upper part of the state. Its unadorned simplicity and solid stone construction are characteristic of buildings erected by early Scotch-Irish settlers in the Southeast. A simple rectangular building constructed of irregular stones, the church stands as a reminder of mid-nineteenth century rustic church architecture. The gable end is the main entrance façade and is centered with double doors flanked by two narrow windows at a slightly higher level. Its simplicity, uncomplicated symmetry, and fine stone masonry are features that make it a valuable record of upcountry rural architecture.

One of the few changes made in the church was the removal of the original rear slave gallery in the first third of the twentieth century. Many churches in Laurens County are “daughters” of this old church as members of its congregation left to establish new churches in neighboring areas. The church is situated on a wooded site and is flanked by a cemetery containing carved stone markers of both Revolutionary and Civil War soldiers. The earliest grave dates from 1776.