Center Methodist Church in the Oconee County community of Oakway was formed in 1836, and its location originally served as a camp meeting site. Rather than traveling to a church in the closest town, members would gather outdoors at a “camp” and listen to sermons preached by itinerant Methodist ministers traveling on their routes known as circuits. Center Methodist was the only congregation on the Pickens Circuit. 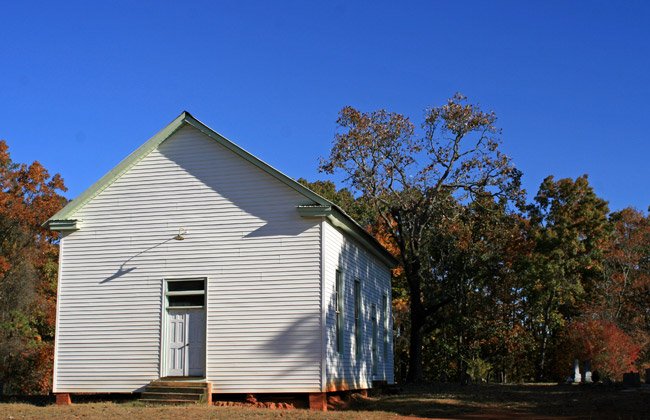 Around 1870 this meeting house was built, which increased the popularity of the church for Oakway residents and other nearby Methodists. The church remained on a preaching circuit, however, and by 1878 Center Methodist had been shifted to the Townville Circuit. By the 1930s Center Methodist Church had diminished in membership, as many parishioners opted to join a congregation in Townville. As a result, Center Methodist closed. 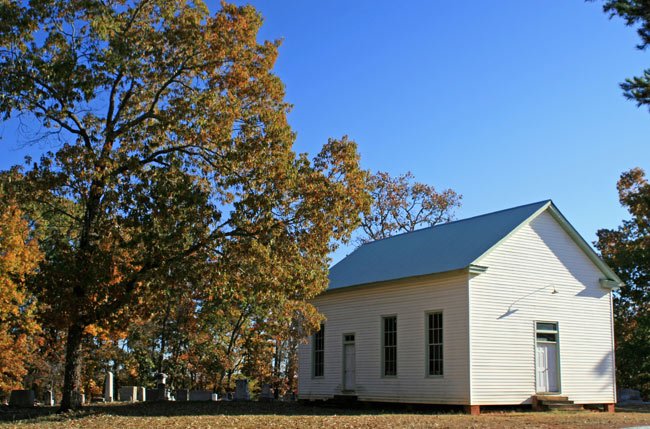 According to twin sisters Thelma and Zelma Mason, who were born in 1915 and grew up across the street from Center Methodist, a tent revival was held in Oakway some time in the 1930s that they suspect pulled membership away from Center Church. With only a church reunion held in 1944, Center Methodist became a vacant building with no congregation to care for it. 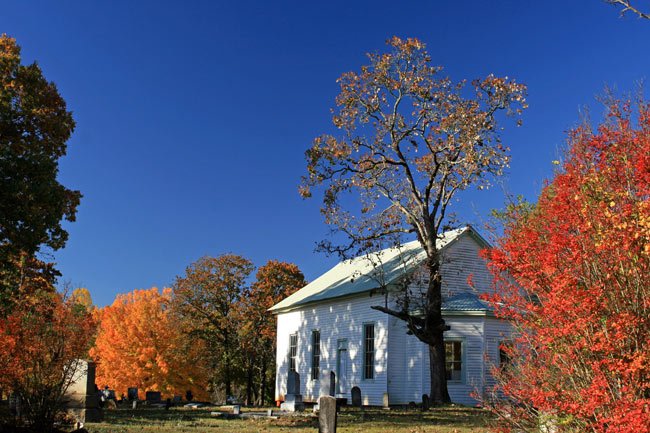 Fortunately for the one-room building, the Mason sisters donated their time and money to the upkeep of the church to the best of their abilities. Their efforts paid off; in 2009 the United Methodist Conference of South Carolina donated the building to the Oconee Heritage Center with the intent of restoring the building and use it for interpretive purposes. The group has evolved to become the Historic Center Church Association, which now owns and maintains the church and graveyard. 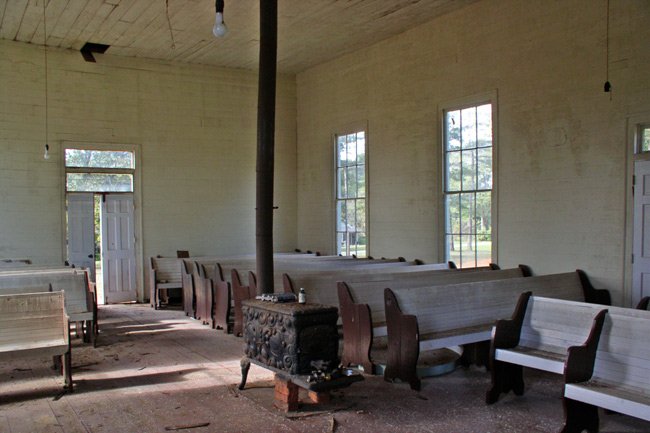 The fundraising attempts by the sisters not only kept the building reasonably preserved, but also drew attention to a church that was significant in the religious history of Oconee County. Thanks to the efforts of the Mason sisters, Center Methodist Church opened its doors for a Christmas worship service in 2013. The Historic Center Church Association hopes to continue hosting Christmas Eve morning services each year. 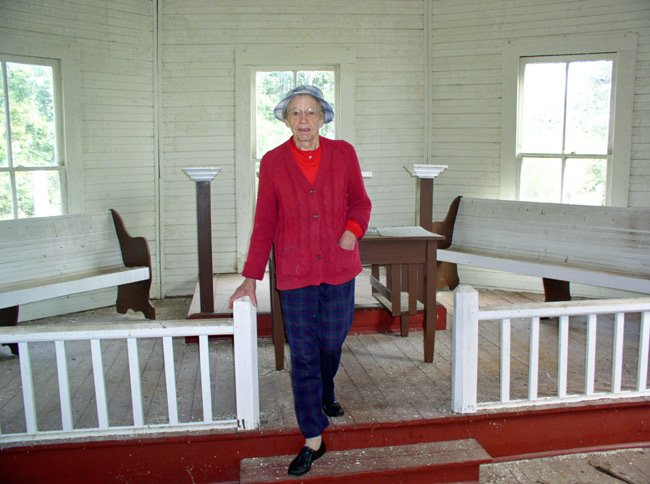 Below is an article that was contributed to the South Carolina Picture Project by Bill Segars of Hartsville. It originally appeared in his local paper, The Darlington New & Press. It was published in December of 2015.

My hope is that each of you had a wonderful Thanksgiving. So I could have a good Thanksgiving and not think about writing this article the entire weekend, I’ve chosen to write a short one this week. It will be short because not much is known about Center Methodist Church in Oakway. Yes I know, not many of you know where Oakway is. I didn’t either until I drove through it, very quickly. Center Methodist is located at 6645 West Oakway Highway (South Carolina Highway 24) in Oconee County, southeast of Westminster. Do you know where I am now?

Since I first saw Center Methodist on October 15, 2004, I have been able to obtain a couple of printed documents pertaining to its history. Most of what I know about this little building was told to me by a person that experienced its growth and decline firsthand. The printed documents simply confirmed what I was told. The delightful person that I was fortunate to meet that beautiful fall day in 2004 is “The Story of Center Methodist Church”.

I was not looking for Center Methodist that fall day, I was driving from point A to point B, looking at the beautiful fall foliage of upstate South Carolina. Even when I saw it, I didn’t know what I was seeing. There was no church sign, no steeple with a cross, just a few tombstones behind the building that could be seen from the highway. That was the only hint that this little 30-foot-by-44-foot white lap siding building sitting on top of a red clay hill in a grove of hickory trees could possibly be a church.

Feeling rather sure of the possibility that it could be a church, I turned around and went back. As I parked, I saw a lady raking leaves in the front yard of the house across the road. When we made eye contact, she waved and I waved, at which time she began walking towards me. The closer she got to me I could tell that she was an elderly lady, possibly wondering what I was doing. When we greeted each other, I sensed very quickly that I was in the presence of someone special, a sweet lady. I took my hat off, introduced myself, told her what I was doing, and asked her if this building was a church.

From this point, 89-year-old Zelma Mason took over the conversation. She asked if I would like to go inside the building. Of course, I said yes. She shuffled back across the highway to retrieve the key. When we went inside, everything was there: the pews, the pulpit and the pot belly stove. We sat on a pew, and Miss Zelma began to tell me the story of Center Methodist. I don’t know who enjoyed our time together more, Miss Zelma or me. It was a rewarding day that I’ll never forget.

Some of her exact dates were a little uncertain – remember, Miss Zelma at the time was 89 years old, born in 1915. Between the printed information that I’ve found and the fact that Miss Zelma has lived across from the church with her blind twin sister, Thelma, since birth, this is what I’ve learned about Center Methodist. The first mention of a church in the Center Community is noted in the Pickens Circuit records, dated August 8, 1851. There is no mention of a building, but as a “camp meeting under a brush arbor”. Miss Zelma has been told that the building we were sitting in was built sometime between 1860 and 1870.

There is a record of a reunion service being held there on July 30, 1944. After that, the church fell silent again. When the building began to fall into disrepair and conversation circulated that the building might be torn down, the Mason sisters put in $1,000 of their money along with $4,000 that they raised to repair the building’s windows, roof and siding. Miss Zelma told me, “I didn’t want the families of the folks buried here not to have a church building beside their loved ones.” They did this because they loved the little church building across the highway from their house. Keep in mind, the Masons were never members of Center Church, they were members of Bethel Baptist Church.

In 2009, the United Methodist Conference of South Carolina donated Center Church to the Oconee Heritage Center. When work began to repair Center again, at the age of 94, Zelma and Thelma were there to “supervise” from their front porch. I was fortunate to be able to keep up with this work over the next four years as the Heritage Center readied the building for a Christmas service on December 24, 2013, the first service in 69 years. Christmas Eve is a busy time for everyone, and Oakway is a long way from Hartsville, but this service was a “must be there” for me. I couldn’t think of a better place to be that year to celebrate the birth of Christ and the rebirth of Center Methodist Church.

At the age of 98, Miss Zelma was not able to attend this service due to declining health. She told me in 2004 how pleasing it was as a child to see the churchyard full of the members’ horses and buggies. So I have the peace of mind knowing that she must have been pleased to again see the parking lot full, this time with cars, from her bedroom window. If you happen to be in the area, or can see your way clear to attend the 11:00 a.m. service on December 24 at Center Church, you’ll experience one of the best country Christmas services of your life. Unfortunately Miss Zelma will not be there; she died peacefully on August 30, 2014 at the age of 99.