This Gothic Revival sanctuary houses the oldest congregation in Spartanburg. The church formed in 1838, and soon afterwards it acquired the present lot and built a wood frame structure for worship. By 1848 the church, then known as Spartanburg Methodist Church, received its first permanent minister; previously, an itinerant preacher had served the congregation. Membership continued to grow during these first few decades, and by 1854 a new building was necessary to accommodate the thriving church. The new church provided seating for up to 200 people. 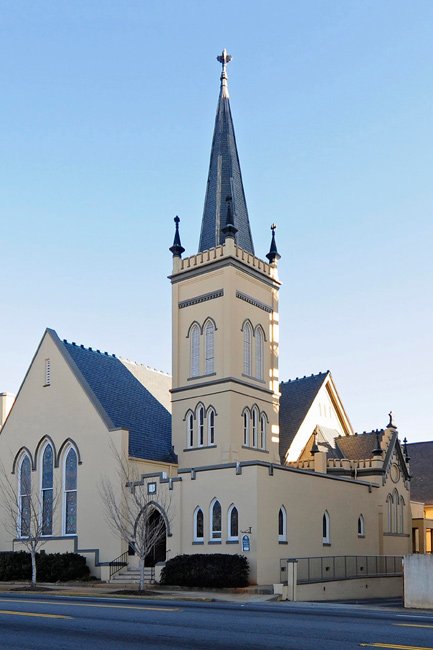 Also in 1854, neighboring Wofford College was founded; a Methodist minister named Benjamin Wofford, who died in 1850, had bequeathed funds for a local Methodist college. Before he passed, Mr. Wofford helped establish Spartanburg Methodist as a founding trustee, and the college and church have been closely entwined ever since. Mr. Wofford had, in turn, served as a trustee for Spartanburg Methodist, and between 1837 and 1838, he purchased land for the church’s parsonage. 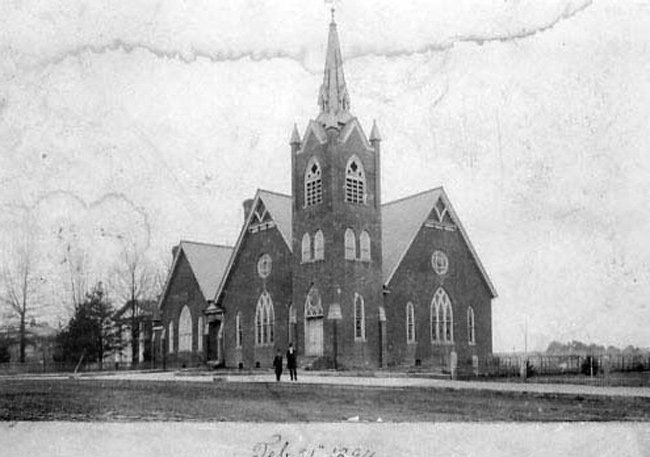 SC Department of Archives and History, 1894

By the 1880s the church was yet again in need of a larger sanctuary. Membership had more than doubled the occupancy of the 1854 church, and the current edifice replaced the old one in 1886. The church was renamed Central Methodist in 1889. The new sanctuary was designed by members of the church building committee, which included several professors from Wofford College, and was made of red brick, as seen above. Just a decade later, between 1896 and 1897 the church underwent significant architectural changes, including the addition of Gothic features such as a steeple tower, parapets and pinnacles on each of its four corners, and an apse, or domed recess to house a new organ. Also during this renovation, the pale yellow stucco was added to the exterior. 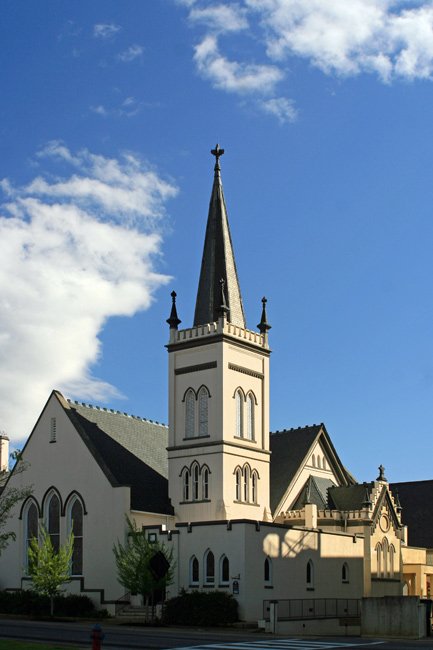 Despite these changes to the church, more were needed throughout the twentieth century. In 1909 the congregation neared 1,000 members, and an Atlanta architectural firm enlarged the sanctuary by 60 percent with the addition of two transepts, or areas that cross the central portion of the church. These transepts also give the sanctuary its present interior cruciform shape. In 1930 the educational building was added to the church grounds, designed by Anderson architect Charles W. Fant, a graduate of Clemson University.

Following the completion of the present church in 1886, Wofford College held its Baccalaureate services within its sanctuary for many years. Today the school holds the service on its main lawn. The college and church remain closely connected,however; many students attend Sunday school and church at Central United Methodist, and many professors still fill the pews within its historic sanctuary.

Central United Methodist Church is listed in the National Register:

This Gothic Revival sanctuary, constructed in 1885-86 with substantive alterations in 1896-97, 1909-10, and 1930, is an excellent example of late nineteenth and early twentieth century interpretations of the Gothic Revival style and is associated with some of the most prominent architects of South Carolina and the Southeast during the period. Central Methodist, the first church established in Spartanburg, was founded in 1838 and known as Spartanburg Methodist Church until 1889. The first sanctuary, a frame building, was built soon afterwards and served the congregation until 1854, when it was demolished and replaced by a more substantial church. The second church was demolished in 1885 and replaced in 1886 by the present Gothic Revival church, described as “an ornament to our town” shortly before its dedication. The outside walls are a light yellow stucco, with beveled cast stone window sills, belt courses and matching drip moulds over pointed arched window and door openings. A 100-foot bell tower on the southwest corner was adorned with a steeple, gables on each side, and pinnacles at all four corners. The 1896-97 renovations are attributed to and were carried out according to plans by the noted order-by-mail house architect, George F. Barber of Knoxville and under the supervision of an architect named Hill [now known to be a man named Hook] of Charlotte included two large additions, a small secondary steeple, and a large addition to the main steeple. By 1909-10, the congregation had increased to more than 800 members, and reviewed plans by the Atlanta architectural firm of Norrman, Hentz, and Reid for another expansion intended to increase the size of the sanctuary by some sixty percent. Within twenty years, the church needed still more room, and the church hired Charles W. Fant of Anderson as the architect for a Sunday School addition and a remodeling of the auditorium