This Victorian building with the ornate mansard roof was built in 1882 in downtown Spartanburg. It served as an early office for the city newspaper, The Spartanburg Herald-Journal. Spartanburg’s growth during the first half of the 1880s was significant; the city received a charter from the state legislature in 1880, and Spartanburg officials quickly improved infrastructure, implementing water services and also paving streets. 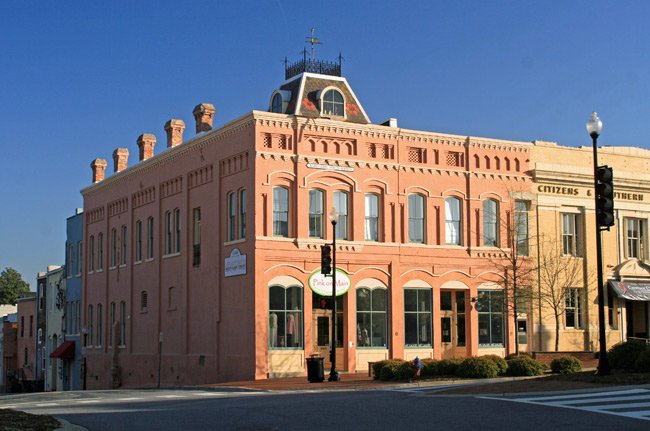 With the new charter – and with the establishment of prosperous railroad and textile industries – 75 businesses were operating in downtown Spartanburg by 1880, many facing the public square. The statue of Revolutionary War hero Daniel Morgan, commander of the Battle of Cowpens, was added to the public square that same year and dedicated in 1881. The statue gave rise to the square’s name, Daniel Morgan Square. 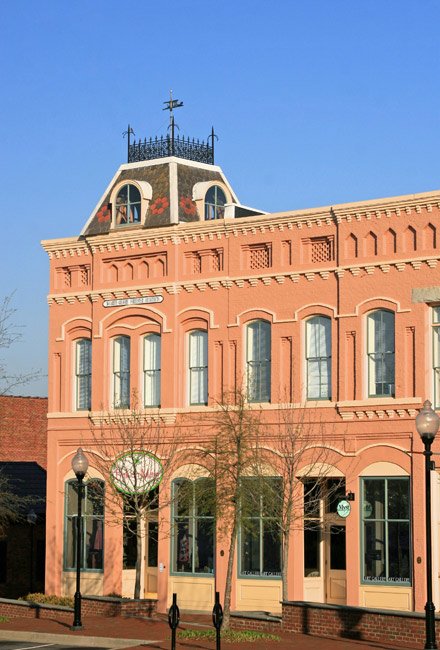 Today the Vann Building sits within a stone’s throw of the square and is currently used as office and retail space. True to its history, the late nineteenth century buildings around Morgan Square – including the Vann Building – continue to be the center of Spartanburg commerce as well as community activities.

The Vann Building is part of the Spartanburg Historic District:

The Spartanburg Historic District contains a concentration of late-nineteenth and early-twentieth commercial architecture in and around Morgan Square in the commercial district of Spartanburg. The town started in the late eighteenth century, named for the Revolutionary War militia regiment called the “Spartans.” The town grew slowly until the late nineteenth century. With around thirty-four contributing properties, the Morgan Square area is historically the center of the city and its architectural character reflects a period of prosperity occurring between 1880 and 1920 when Spartanburg became a leading textile and railroad center in South Carolina. During this period, downtown was substantially rebuilt with new brick commercial structures. Most of the buildings constructed during this period were two- to three-story masonry structures with decorative detailing. Approximately ninety percent of the buildings in the district were built before 1925. Stylistic influences include Neo-Classical, Art Deco, and most commonly Italianate or Commercial style influences. While some alterations have been made to storefronts, a majority of contributing properties in the district retain their architectural integrity.