Many South Carolinians associate native artist Blue Sky with his popular public murals and sculptures in downtown Columbia, such as Tunnel Vision and Busted Plug. Yet his dramatic works can be viewed in other parts of the state, such as this trompe l’oeil painting in Union titled Union Mural. 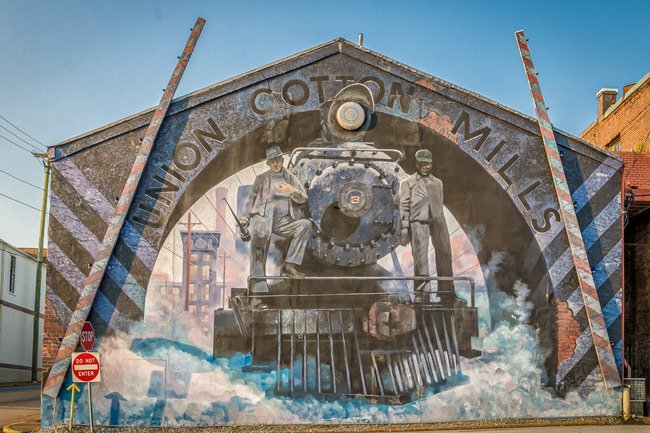 The mural, begun in 2007 and installed in 2008, depicts a train transporting textiles for Union Cotton Mills. Completed in 1894, Union Cotton Mills was the first textile mill in Union County and the first in South Carolina designed by noted textile mill engineer William Burroughs Smith Whaley. His design firm, W.B. Smith Whaley and Company, is responsible for 15 new textile mills or major renovations and additions to existing mills in the state, including nearby Buffalo Mill, Newry Mill (also called Courtenay Mill) in Oconee County, and Granby Mill in Columbia. 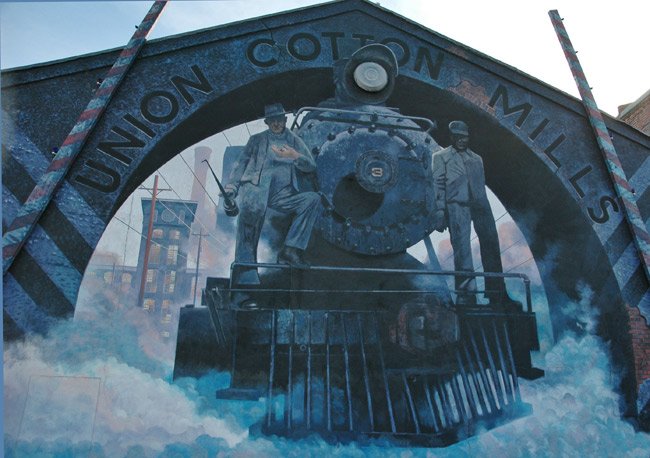 Susan Buckley of Charleston © Do Not Use Without Written Consent

Blue Sky, a Columbia native, University of South Carolina alumnus, and recipient of the Order of the Palmetto, captures the spirit of the booming textile industry in the late nineteenth century in the above mural. It is painted on the back of a downtown building which has been occupied by various businesses over the years. Though the building faces Main Street, the mural actually can be seen behind the building on Sharpe Avenue.

Reflections on the Union Mural

Contributor F. Everett Leigh says: “In 2007, the famed artist and muralist Blue Sky visited Union and put his magic brushes on the rear wall of a Main Street building to recognize and honor the role of textiles and the railroad in Union’s rich history.”