Historians now refer to the intelligence-gathering mission ordered by General Francis Marion as more of a skirmish than a battle. Still, the incident, which occurred in present-day Kingstree, proved useful in giving General Marion the information he needed to avoid what likely would have been a losing battle later. 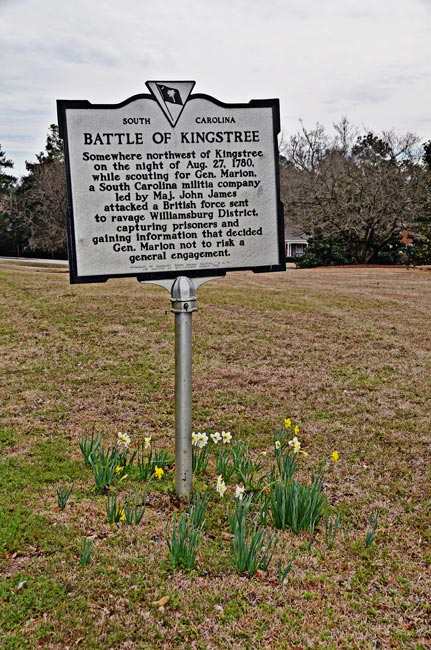 Major James Wemyss of the 63rd Regiment and his men had been terrorizing people throughout Williamsburgh District (now Williamsburg County) under direction from Lord Cornwallis. People’s homes were raided and burned by the Loyalists as they pilfered arms and horses before leaving the area in destruction. The original Indiantown Presbyterian Church was said to have been destroyed in this incursion.

General Marion sent a small group of partisans led by Major John James to hide near Wemyss’ post in Kingstree and assess the strength of the British troops. On the night of August 27, 1780, James and his men advanced on the Loyalists, killing or wounding 15 men and capturing 15 more. However, the militia group was not unscathed in the ambush; the British killed five of James’ men, wounded 15, and captured 10. The information that was delivered to Marion as a result of the mission indicated that the British force was too large to allow Marion and his men any success, so the militia withdrew to eastern North Carolina to bide their time until they could return and fight.

The location of the skirmish is thought to have occurred somewhere near Kellahan Park.

Many thanks to Linda Brown for contributing the above photo and much of the information.

Plan Your Trip: Battle of Kingstree