This elegant house in Abbeville was built in 1825. James C. Calhoun – nephew of U.S. Senator John C. Calhoun, an Abbeville County native – lived there from the 1840s until 1866. The distinctive boxwood gardens that are highlighted by the afternoon sun were planted in 1859. Four other gardens in Abbeville are adorned with boxwoods of the same cuttings brought to the city from Baltimore. 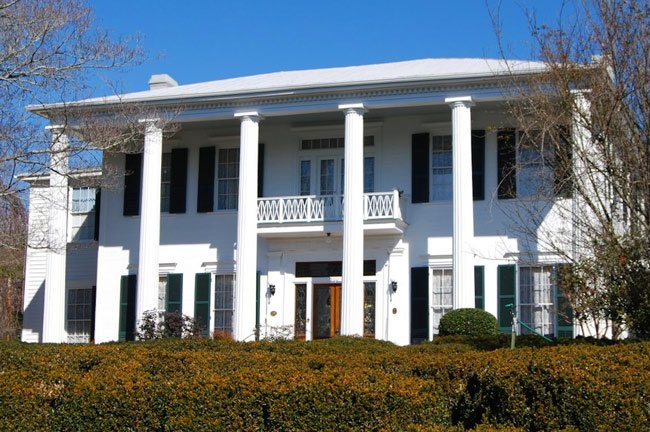 Brian Scott of Anderson, 2009 © Do Not Use Without Written Consent

The home was restored to its current state by Brigadier General and Mrs. Ben Johnson. It is adjacent to the Abbeville Recreation Center facilities, where it was hidden behind overgrown foliage for many years. Today it is a highlight of its historic Abbeville neighborhood. 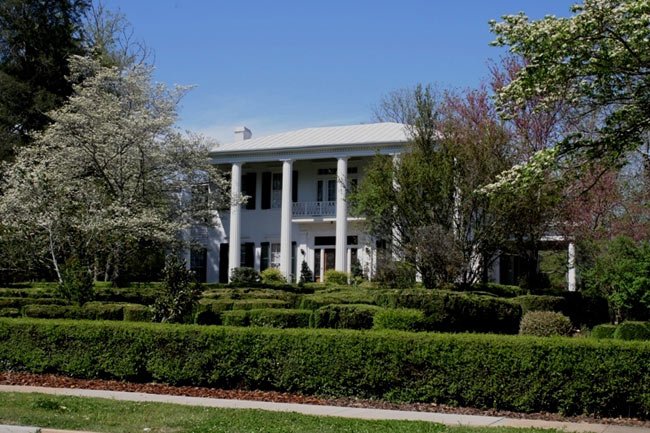 The Calhoun-Smith House is listed in theNational Register as part of the Abbeville Historic District:

The Abbeville Historic District is comprised of a large portion of the city of Abbeville, the county seat of Abbeville County, South Carolina. Of the 528 properties in the district, 319 contribute to its historical character. The focal point of the district is the Court Square, on which are located the County Courthouse, Municipal Building, and a well-preserved collection of late nineteenth century brick commercial buildings. The district also includes the older residential section sections of the city, several churches, two school buildings, and three buildings associated with the city’s railroad history.

The city of Abbeville was formed in the late eighteenth century; however, most of the properties included in the district reflect the city’s history throughout the nineteenth and early twentieth centuries. As a result, the buildings display a wide variety of architectural styles including Second Empire, Gothic Revival, Beaux-Arts, Queen Anne and Bungalow. In addition, the district reflects the city’s role as a commercial center for the surrounding county. The city is also noted for its role in the political and governmental development of the area. Several residences are important for their association with persons or events of historical significance are located within the boundaries of the district.

Reflections on the Calhoun-Smith House

Contributor and Abbeville native Mark Clark shares the following: “I went to the recreation center for many years as a boy never realizing a house like this existed in Abbeville. The Johnsons cleared the property and the whole town was amazed at the hidden jewel that had been discovered. The house was painstakingly restored by the Johnsons and is my favorite house in Abbeville.”