The courthouse below served Chesterfield County until 1978. Designed by architect Robert N. McGrath, it was built in 1884 to replace one burned by General Sherman during the Civil War. Points of interest include a cupola with a Second Empire mansard roof. The elevated brick entry was added to the building in 1937 by the Works Progress Administration. Today it is known as the Old Chesterfield County Courthouse and houses the Chesterfield Visitors Center.

Chesterfield County’s first courthouse was located on the same site; its architect was Robert Mills. It stood until March 2, 1865, when Sherman’s troops burned the courthouse and all its records during their occupation of Chesterfield.

The granite marker below was erected on the grounds of the Old Chesterfield County Courthouse in 1928 by the combined Chesterfield County chapters of the United Daughters of the Confederacy. It proclaims that the original courthouse hosted the first secession meeting in the South in 1860 (Abbeville disputes this claim). The Craig House, another of Chesterfield’s most historic landmarks, stands across the street. 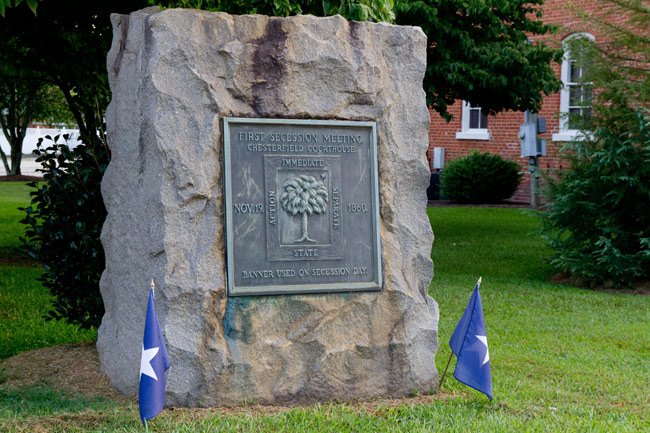 James Jenkins of Chesterfield, 2013 © Do Not Use Without Written Consent

The courthouse is listed in the National Register as part of the East Main Street Historic District:

This courthouse was built ca. 1884 to replace an earlier building, which reputedly had been burned by Sherman’s troops in 1865. The courthouse is a two-story brick building with a cross-gabled metal roof and a tall cupola with a Second Empire mansard roof, recessed behind the facade. The building has offices on either side of a central longitudinal hall on the first floor and a single large courtroom on the second floor. The windows of the building have segmental brick arches. A brick entrance porch was added by the WPA in 1935, and a two-story rear addition was built at the same time. The building was used as the county courthouse until 1978, when the Department of Social Services occupied the building. The courthouse grounds contain a marker erected in 1928 by the seven chapters of the U.D.C. in Chesterfield County to commemorate the “First Secession Meeting.”