The historic bell tower of Laura Lander Hall (originally called Greenwood Hall) at Lander University in Greenwood welcomes students to its 123-acre campus. The school was founded on February 12, 1872 in Williamston (Anderson County) by the Reverend Samuel Lander, a Methodist minister and innovator in education.

The school was originally called the Williamston Female College and sought to introduce students to the Friedrich Froebel method of teaching. Froebel, a German, is considered the founder of modern education and created the concept of kindergarten. (In keeping with his admiration of Froebel, the Reverend Lander also introduced a kindergarten program in Williamston in 1876.) Continuing the school’s original mission of training future educators, today Lander University is the only school in South Carolina that offers a program in Montessori certification.

After its founding, the school flourished, and the South Carolina Conference of the Methodist Episcopal Church, South assumed control of the college in 1898. Due to its high enrollment, the school purchased land in Greenwood to relocate its campus and accommodate more students. The Old Main Building was constructed between 1903 and 1904, designed by Chattanooga architect Reuben Harrison Hunt and consisting of two sections initially – Greenwood Hall, the main building and bell tower, and Laura Lander Hall, an adjacent dormitory named for Lander’s wife.

Lander died before construction was complete, and his son-in-law, the Reverend John O. Willson, became president of the school. The Greenwood campus opened its doors on September 24, 1904, and the South Carolina General Assembly elected to change the school’s name to Lander College in honor of its founder in 1905. The stone pillar seen in the above image was donated by the Class of 1910.

By 1911 another dormitory, Willson Hall, was added to the Old Main Building, attached to the original Laura Lander Hall with a three-story connector. The college continued to grow, and in 1943 the school accepted its first male student. The school became disaffiliated with the Methodist church in 1948, and it fell into the ownership of Greenwood County in 1951. Lander College became a state school in 1973, and the school’s name was changed to Lander University in 1992. In 1993 the original Laura Lander Hall and Willson Hall dormitories were demolished to make room for a new science building. Greenwood Hall was restored and renamed Laura Lander Hall. Today it contains classrooms and laboratories, and it houses the Department of Mathematics and Computing. 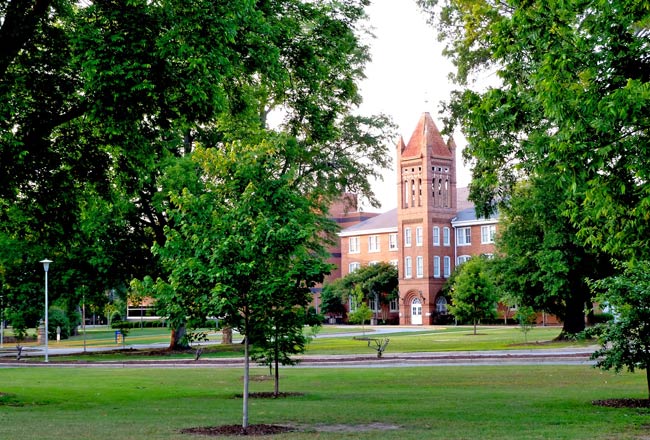 Another beloved landmark on the Lander University campus is the amphitheater, seen below. Formerly called “The Dingle,” which means a sylvan or wooded clearing, the open-air stage was formally named the Jean Tribble McFerrin Amphitheater for a Class of 1848 alumna and former member of the Board of Trustees. The theater offers seating for up to 700 people who attend performances and other presentations held at the charming outdoor venue. 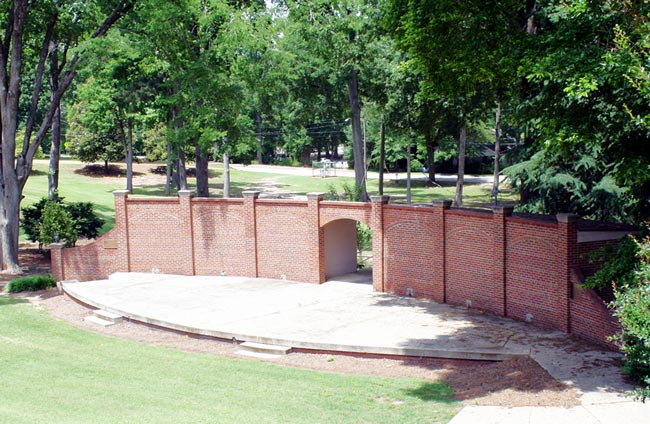 Pictured Below is Dolny Baseball Stadium within the Jeff May Sports Complex. The May Complex opened in September of 2011 and includes 25 acres of athletic fields, including 12 tennis courts, a soccer field, a track, a softball stadium, an intramural field, and the below baseball stadium. The state-of-the-art sports complex is named for the university’s athletic director, Jeff May. The facility not only enables student athletes to train at their best, it also allows Lander University to host elite events such as the Peach Belt Baseball Tournament. The baseball stadium was named for the late Stephen B. Dolny through a gift to the school from his wife, Linda, a Lander alumna. Dolny was a member of the Lander Foundation as well as a member of the Board of Visitors and, along with his wife, established several endowed scholarships at the school. 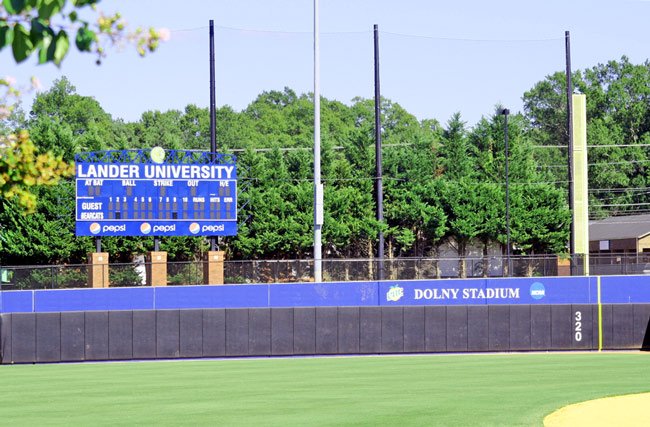 Lander University continues to thrive as a state school of around 3,000 students from 29 states. Among its many programs of study are its renowned nursing program and a state-of-the-art equestrian center, which the university describes as “the first university-based equestrian facility in South Carolina to offer academic, therapeutic and sporting opportunities for students and community members.”

Laura Lander Hall is listed in the National Register as the Lander College Old Main Building:

(Greenwood Hall; Laura Lander Hall; Willson Hall) The Old Main Building of Lander College is a large masonry building, composed of three distinct sections displaying an eclectic blending of elements of the Romanesque Revival and Georgian Revival styles. Two of the sections—Greenwood Hall and Laura Lander Hall—were built in 1903-04; Willson Hall was added in 1911. Old Main is significant as the earliest Lander College building and for its association with the educational theories proposed by the college’s founder and first president, Samuel Lander. Architecturally, Old Main possesses significance as an efficiently designed, early twentieth century college building and as an example of the designs of prominent Chattanooga, TN architect Reuben Harrison Hunt. The tower serves as a focal point for the building and defines its character as a school building. Thomas W. Cothran of Greenwood designed the 1911 addition. Methodist minister Samuel Lander founded Lander College in Williamston on 12 February 1872 as Williamston Female College. The South Carolina Conference of the Methodist Episcopal Church, South, assumed control of the college in 1898. As the college prospered it became necessary for the physical plant to expand and the city of Greenwood offered land and financial incentives for the institution to relocate in 1903.

Contributor David Kennedy says of his photo of Lander University: “This place is special because I am a 1983 graduate. Also included in the photo is the rock pillar donated by the class of 1910. It stands at the entrance to the main building.”