This clock, located on the corner of Main and Hampton Streets in downtown Columbia, is just one of two very similar town clocks in our state capital. The famous Sylvan Brothers had this clock installed in front of their historic jewelry store in 1906. It was designed by the Seth Thomas Clock Company. 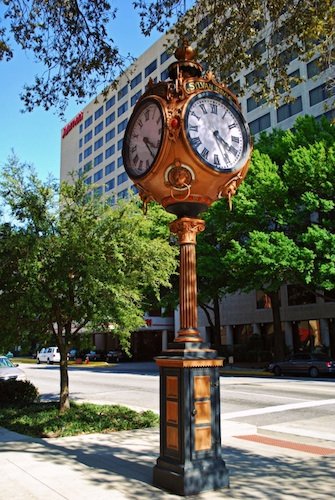 Seth Thomas was an American clockmaker who apprenticed for Eli Terry in 1807 and bought Terry’s clockmaking business in 1810. In 1813 Thomas acquired another clockmaking company owned by Heman Clark. Thomas flourished in the industry, finally incorporating the Seth Thomas Clock Company in 1853. Following Seth Thomas’ death in 1859, his sons continued in their father’s business until the company merged with Western Clock Company to form General Time Instruments in 1930. 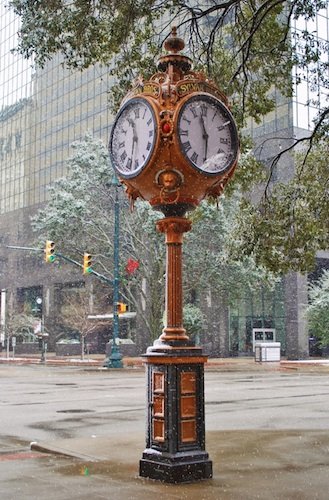 The other clock, pictured below, is located just one block awayon the corner of Main and Washington Streets. Though not a Seth Thomas clock, it is nearly identical in design to its neighbor. 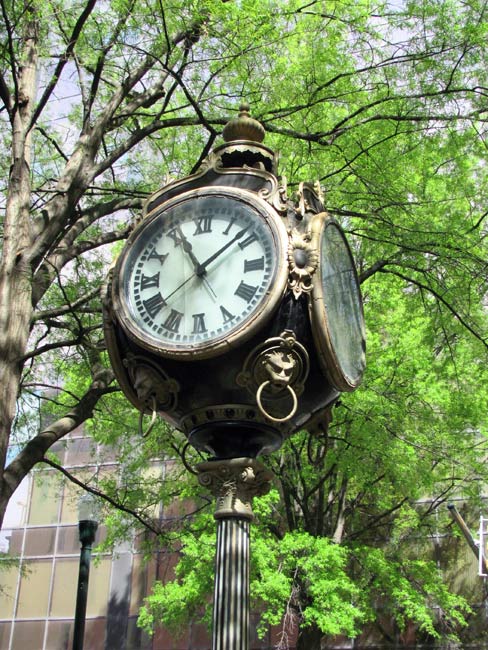 Carol Gant of Rock Hill, 2014 © Do Not Use Without Written Consent

Reflections on the Columbia Town Clock

Contributor Frederick Austin has seen the clock in front of Sylvan Brothers opened and manually wound: “It was neat to see all the gears and the old fashioned equipment inside of a clock that size.”

Carol Gant, who captured the photo at the bottom of the page, shares: “It was a beautiful Saturday day. A street musician was playing an electric violin. I was there with my daughter to go to the art museum.”