Gilland Memorial Park in Kingstree sits along the banks of the Black River, offering spectacular views of its black waters and captivating wildlife. The park includes a one-lane boat ramp for access to the water, allowing boaters a day on one of South Carolina’s Scenic Rivers. Low waters expose white sandy banks which resemble the snow seen in the below January photo. 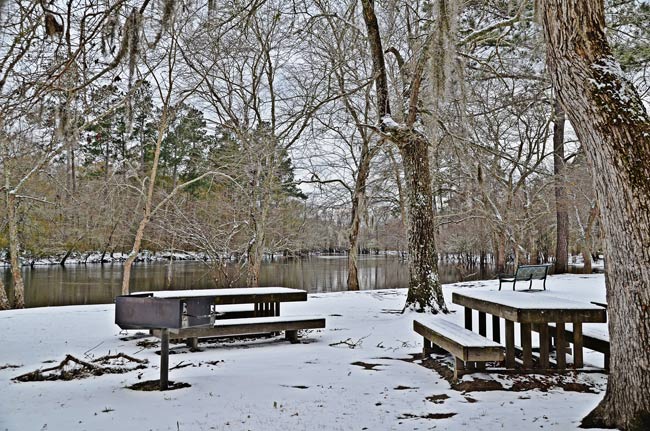 The park also provides a picnic area with grills, a playground, and a roped-off section for swimming. Before this area became a public park, it was known as Scout’s Cabin. Today the park is named for the Lewis Gilland, whose family donated five acres of land to the town of Kingstree to be used as public recreational space. Gilland served as mayor of Kingstree. 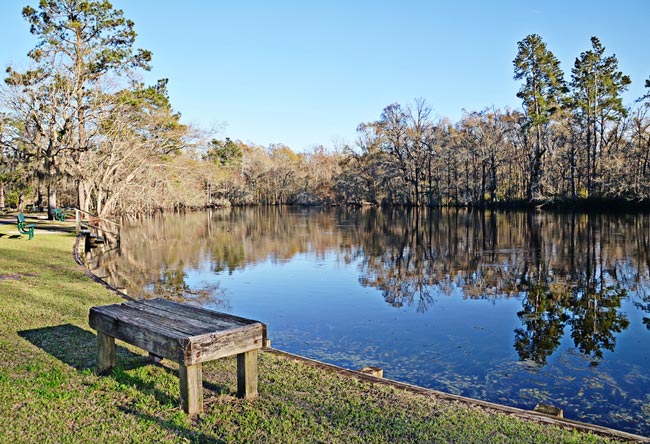 On October 31, 2014, the South Carolina Department of Natural Resources released 83,000 redbreast sunfish into the Black River at Gilland Memorial Park to help repopulate the species, which had suffered in numbers due to drought. Then-Lieutenant Governor Yancey McGill, who oversaw the DNR’s budget for 14 years as a member of the state senate, was present at the release and is an avid supporter of the state’s Freshwater Fisheries program.

Contributor Linda Brown describes her above photo: “Picnic tables and grills at Gilland Memorial Park on the Black River in Kingstree were all under snow in January, 2014.”

Brown also tells us about her sunny photo: “Gilland Memorial Park on a sunny March Sunday afternoon. The park is actually named in memory of Lewis Gilland, whose family once owned the property and who, himself, was Mayor of Kingstree.”