The Town of Kingstree, located in Williamsburg County, was settled by Europeans in 1732 as part of royal governor Robert Johnson’s plan to create townships along the coastal plain to afford protection for the coast. The settlement along the Black River was named Williamsburg (also spelled Williamsburgh) Township for King William III, known as William of Orange, and in 1734 it became a part of Prince Frederick’s Parish. In 1804 the parish was organized as Williamsburg District, and Williamsburg Township served as the district seat. The district then became Williamsburg County in 1868, two years after the town was incorporated as King’s Tree, now the county seat. 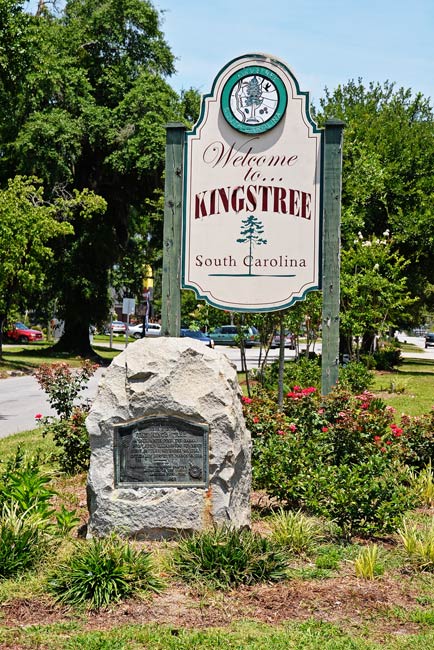 According to legend, “Kingstree” earned its sobriquet when early explorers discovered a large white pine tree and marked it with an arrow for future use as a mast for the Royal Navy. A nearby settlement took on the appellation, and the name officially became one word in 1886.

The marker mounted in the boulder, seen above, was placed at the entrance to Kingstree in 1923 by the Margaret Gregg Gordon Chapter of the Daughters of the American Revolution. It is said to stand at the site of the famed white pine. The marker reads, “Here stood The King’s Tree, a tall white pine, the basal point for Williamsburg Township, first settled November 25, 1732, officially surveyed March 18, 1736.”

Contributor Linda Brown says, “This marker is supposed to be on the site of the original King’s Tree. The story says that a large white pine with a diameter of 24 inches greeted settlers to the area from the banks of Black River. It has been designated as a King’s Tree by a large arrow to denote its royal claim. These trees were to be used for masts for the Royal Navy. White pines are not commonly found in this area and there are many who raise an eyebrow to this claim. However, the area became known as the King’s Tree and was later incorporated as Kingstree. The marker itself was placed by the Margaret Gregg Gordon Chapter of the DAR in 1923.”