Like many other post offices in South Carolina, the one in Kingstree was built in the late 1930s as a WPA (Works Progress Administration) project under President Roosevelt’s New Deal. Construction on this building began in 1937 and was completed in 1938. An addition was built in 1983. 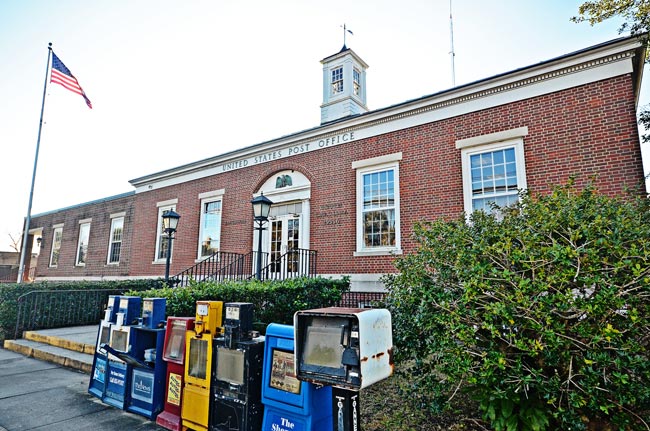 A mural titled Rice Growing, seen below, adorns the interior of the post office. Located above the door to the office of the postmaster, the oil painting is the work of New York artist Arnold Friedman and is one of 13 paintings to grace various post offices throughout South Carolina. The murals were commissioned by the Section of Fine Art of the United States Treasury, which was established in 1934 for the purpose of installing art in public buildings, thus making it accessible to all.

Many thanks to contributor Linda Brown for her above photos and much of the information on this page.

Contributor Linda Brown tells us, “This mural, titled Rice Growing, is painted directly onto the wall above the door to the Postmaster’s Office in the Kingstree Post Office. It was painted in 1939 by Arnold Friedman (1874-1946). Born in Corona, Queens, New York, Friedman studied at the Art Students League of New York and also spent 1909 studying in Paris.”